The Boy from Boree Creek 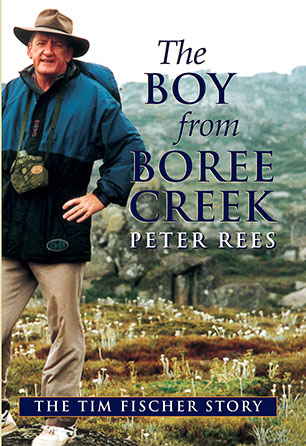 A candid account of the life and career of Tim Fischer, one of Australia's best-known and most respected politicians.

June 30, 1999. Tim Fischer, Deputy PM and Leader of the National Party, rises in the House of Representatives to announce his resignation. Here was a politician at the height of his career, giving it all up for his family.

What led Tim Fischer to this moment, which captured the attention of not only those MPs in the House but the entire nation?

The Boy from Boree Creek describes Tim's upbringing and family background, his service in Vietnam and his entry into NSW politics at the age of 24. It traces his rise through State and Federal politics and describes how, in response to criticism that he was short on leadership charisma, he fashioned an idiosyncratic image for himself. His trademark hat and love of trains, and his long-term commitment to Asia, were to transform him into a more respected and indeed, much loved politician by the time he quit.

This is a fascinating account of the life and career of a man who, for many, bridges the gap between urban and rural Australia. It is an inside look at Australian politics during a time which saw many difficult issues for rural Australia and the nation as a whole. It is also the very personal story of a man struggling with the conflicting demands of political life and family life, against the background of his elder son's autism. It is, ultimately, an exploration of just what makes the politician known as 'two minute Tim' and 'the boy from Boree Creek' tick.
More books by this author

Peter Rees has a long association with federal politics, first working in the Federal Parliamentary Press Gallery between 1971 and 1975, before moving to Sydney to run a newspaper bureau for seven years. In 1983 he returned to Canberra to cover federal politics and has been in the Gallery since that time as federal political correspondent for various newspapers, including The Sunday Telegraph. Rees has known Tim Fischer for several years, and has written numerous articles about him.

5. The sting in the tail

9. A question of leadership

16. The peril of Pauline