Tender at the Bone

Growing Up at the Table 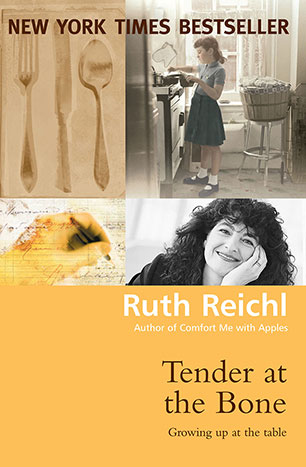 A beautifully written memoir (with recipes) of a life determined, enhanced and defined by food, by the chief restaurant critic for The New York Times.

Like a hearing child born to deaf parents, I was shaped by my mother's handicap, discovering that food could be a way of making sense of the world.

Ruth Reichl is the chief editor at Gourmet Magazine and recognised as one of the world's leading food writers. This is her memoir of a life determined, enhanced and defined by a passion for food, unforgettable people and the love of tales well told.

From her notorious food-poisoning mother (otherwise known as the Queen of Mould) to the gourmand Monsieur du Croix who served Reichl her first souffle to the Berkeley restaurant of the seventies where every worker was a manager and every manager had an opinion, Reichl's story is heart-wrenching and funny.

Reichl writes with such simplicity - even the recipes included in this memoir are stripped down to their bare goodness . . . This is a book about a sturdy child who, by overcoming many obstacles and dangers, creates herself as a distinguished woman of her own world. New York Times

An absolute delight to read . . . how lucky we are that [Reichl] had the courage to follow her appetite. Newsday
More books by this author

Ruth Reichl is the chief editor at Gourmet Magazine, and was the chief restaurant critic for The New York Times. She held the same post at the Los Angeles Times for ten years and was chef/owner at the Swallow Restaurant in California in the mid-seventies. She has written for numerous publications including Vanity Fair, Family Circle, Metropolitan Home and Food and Wine.