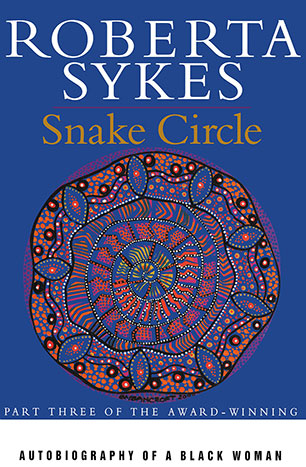 Snake Circle draws the remarkable Snake Dreaming trilogy to a close as we accompany Sykes on the final stage of her journey - this time to Harvard University. It is a vivid recounting of Sykes' experience as the first Australian Black to graduate with a doctorate, and of her growing confidence as she thrives in the new environment of Harvard. It also passionately tells of her relationships with those she loves, such as MumShirl and her children, and the ongoing run-ins she has with the bureaucracy and politicians along the way. A moving and exuberant conclusion to a story that began as a tale of brutalisation.

WHAT THE CRITICS SAID ABOUT SNAKE CRADLE AND SNAKE DANCING:

'Snake Cradle and Snake Dancing are enough to suggest that Sykes' three-volume memoir may well become an Australian classic.' - Sun-Herald

'Once begun, readers should be made aware that Snake Dancing is the kind of book which tugs at you to read it quickly. Once read, it is sure to stay long with us.' - Canberra Times

'It is a testament to the writing as much as to her life that the reader becomes so immersed in the story of Roberta Sykes. It is a story every Australian should read.' - Anne Summers, The Age

'Roberta. that you not only survived but triumphed is an incredible tribute to you and the human spirit.' - David Suzuki

'Reading Roberta Sykes is to be engaged by a great tale and by an uncompromisingly fine writer.' - Janine Burke, The Age
More books by this author

DR ROBERTA SYKES was born in the 1940s in Townsville and is one of Australia's best known activists for Aboriginal rights. She received both her Master and Doctorate of Education at Harvard University, has been a consultant to the NSW Department of Corrective Services and the Royal Commission into Aboriginal Deaths in Custody, was the Chairperson of the Promotions Appeals Tribunal at the ABC, and is the author of several books, including Love Poems And Other Revolutionary Actions (1979) and Mumshirl (1981), Snake Cradle (1997), Snake Dancing (1998) and Snake Circle (2000) as well as having contributed to or co-authored numerous publications, journal articles, conference papers and screenplays.