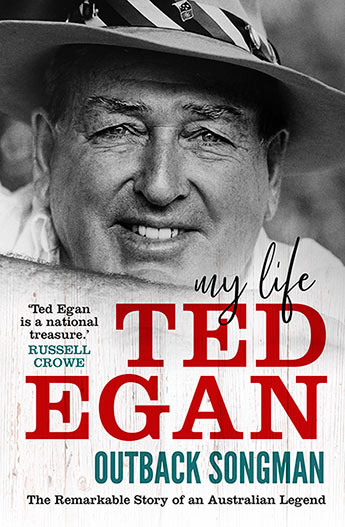 The extraordinary life of one of Australia's great raconteurs and bush musicians, told in his own words.

They don't make them like Ted anymore. He's the quintessential bush storyteller; he has rubbed shoulders with some of the best-known and least-known of his countrymen and women, and he can wring a heart-wrenching song out of a beer carton.

In Outback Songman, Ted Egan recounts the story of his rich and extraordinary life. Born to a working-class family in Melbourne's Coburg, he has never had a music lesson. Nonetheless, he has composed some of the first original songs about Australian history and ethos, many of which are now classics.

Through his stories of growing up during World War II, teaching in a bush school, working with Aboriginal people in the Gulf Country, and performing in Alice Springs and around the country, Ted Egan brings to life an Australia that has largely disappeared. His encounters offer insights into national politics and everyday life over the past eight decades. His generosity of spirit and his deep understanding of his country shine from every page.

'Ted Egan is a gifted natural born storyteller and a wonderful writer.' - Geraldine Doyle, singer and comedian
More books by this author

Ted Egan AO is an Australian legend and one of the great bush musicians. He played to hundreds of thousands in the Ted Egan Outback Show in Alice Springs over 30 years; he was the presenter of the acclaimed TV series This Land Australia, and later The Great Outdoors. He is an inaugural Life Member of the Australian Stockman's Hall of Fame and has a Lifetime Achievement Award from the Golden Guitar Awards. He served as the Administrator of the Northern Territory 2003-2007.

The Outback Songman Chapter... by Allen & Unwin on Scribd