No One Listens to Your Dad's Show 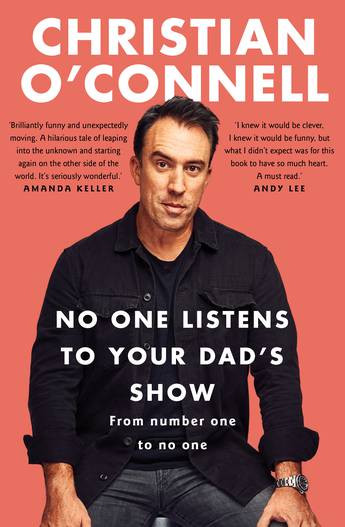 The hilarious and moving story of Christian O'Connell's very public journey from number one to no one.

'Funny, honest and so raw. If Christian's cardiologist is suddenly wondering where his heart has gone, you'll find it all in this book.'
Hamish Blake

'I knew it would be clever, I knew it would be funny, but what I didn't expect was for this book to have so much heart. A must read for not just radio lovers but for anyone who's thinking of making a big life change. It can be done.'
Andy Lee

'Brilliantly funny and unexpectedly moving. A hilarious tale of leaping into the unknown and starting again on the other side of the world. It's seriously wonderful.'
Amanda Keller

'Reading this book is like spending time with Christian. Funny and inspiring.'
Adam Hills

'Christian has achieved something very beautiful and funny with this book, weaving ordinary life and everyday sadness into something hopeful and profound. I loved it.'
Russell Brand

As a radio DJ in London, Christian O'Connell appeared to have it all.

He held the number one spot nationally, with a faithful audience of millions who'd listened to him for years. Celebrities flocked to come on his show and no other radio DJ had won more awards.

But not everything was as it seemed. Minutes before going live one morning, something happened that changed everything and led to a decision of seismic proportions. He quit his job, moved to the other side of the world, where no one knew him, and took on the toughest radio market in the world - Australia.

Why? Is the question he's been asked every day since landing Down Under. Until now he's never shared the real reason.

No One Listens to Your Dad's Show is the story of Christian risking everything, uprooting his wife, two daughters and his dog to move to Australia. A move that lands him as a complete unknown in a country where, he soon finds out, no one wants to hear him on the radio.

He was failing, fortysomething and falling apart.

Until he wasn't.
More books by this author

In 2018 Christian O'Connell was one of the UK's biggest radio stars, the youngest DJ ever to be inducted into the UK Radio Hall of Fame and the winner of an unprecedented 25 radio awards. As a stand-up comedian he sold out national tours.


Then he decided to move to Australia. Struggling at first and written off by industry experts, against great odds on air and off air his breakfast show on GOLD FM in Melbourne went to the highly coveted Number 1 spot within eighteen months, giving the station its highest ratings in over twenty years, making Christian the first DJ to have Number 1 breakfast shows both sides of the world.