No Matter Our Wreckage

A memoir about grooming, betrayal, trauma and love 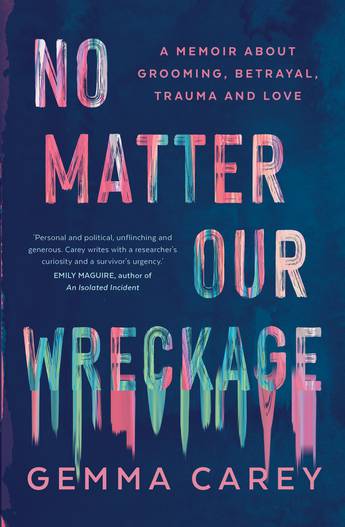 A ground-breaking, uncompromising and unflinching memoir about grooming, intergenerational trauma, grief and love.

My mother knew I was abused as a child. She had read letters sent from my abuser to me…But she never spoke to me about them, or what they described. And she never intervened to stop the abuse…Now she is dying and the past is rising to the surface like a bruise.

When Gemma Carey was twelve years old, a man twice her age would sneak into her bedroom on a weekly basis and sexually assault her. When Gemma was seventeen, she took the perpetrator to court without anyone else knowing and had him placed on the child sex offenders register. When she was thirty-three, her mother died of cancer. For twenty years, her mother had known about this man. But why had she not acted to protect her daughter? Could the genesis of this betrayal be found in her own family history?

No Matter Our Wreckage is the story of past and present colliding. It seeks to capture the complexity of forces which lead to abuse; to understand the intertwined narratives of mothers and daughters and how trauma becomes encoded in our DNA through generations. It explores grooming and the intricacies of consent, and how as a society we have not yet figured out how to deal with these types of crimes or the people who commit them.

No Matter Our Wreckage is a powerful, poetic and unflinching memoir about what it means not to matter, and how an extraordinary woman refused to listen to the stories she was being told about herself - by her history, by her abuser, by her mother, by society. It is only by speaking out that Gemma Carey learns she can break free from her past and reclaim her life, her self and her future.

'No Matter Our Wreckage is a brutal reminder of our responsibility to notice and protect those we love. A devastating and clear-eyed memoir with a poet's voice. Gemma Carey will boil your blood and break your heart.' - Anna Spargo-Ryan, author of The Gulf
More books by this author

Professor Gemma Carey is an author and researcher.

Her writing has appeared in The Guardian, Meanjin, Under The Gumtree, and The Canberra Times amongst other outlets. She has featured on ABC Radio and NPR.

As a writer, Gemma's goal is to capture hard life experiences - grief, loss and trauma - and spin them into something beautiful so that others can see their own experiences reflected back to them and people who haven't experienced such things can learn.

Gemma is an Associate Professor at the University of New South Wales, where she is the Research Director for the Centre for Social Impact. Her academic work focuses on health and social inequalities.

No Matter Our Wreckage Chap... by Allen & Unwin