My life and other palaver 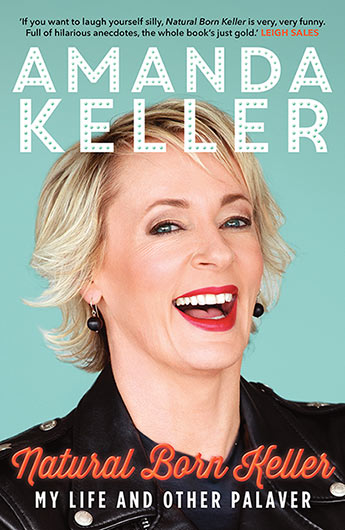 One of Australia's favourite and most multi-talented entertainers lifts the lid on life on-screen and off with not so longing looks back at growing up in the burbs in the decade taste forgot.

By turns hilarious and moving, Amanda Keller takes us on a nostalgia filled journey through her life. From her childhood in sunny Brisbane to her daggy teen years in suburban Sydney. Then onto heady college days in Bathurst, where wine was called 'claret' and came in a box, and finally to establishing a stellar career in TV and radio.

Along the way she falls in love with 'a nice Kiwi boy' who becomes her husband and she tells the story of the arrival of their two hard-won sons. But without too many icky bits.

Amanda also takes us behind the scenes of her TV career - from the challenge of turning on a typewriter at Simon Townsend's Wonder World! to the fun of travelling the globe for Beyond 2000, despite having no scientific background and absolutely no sense of direction. More recently she was able to officially represent an entire generation on Talkin' 'Bout Your Generation and share a couch with three blokes and the odd snake on The Living Room.

Amanda loves 'the wireless' and looks back on twenty years of radio. From sharing a mic with Andrew Denton on Triple M to topping the breakfast show ratings with Jonesy on WSFM.

Vivid, funny and hugely entertaining, Natural Born Keller will have you laughing out loud, nodding in recognition and occasionally bawling uncontrollably - in a cathartic sort of way.

Amanda Keller is a much loved Australian personality who has been on our screens and air-waves for over 30 years. She spent her early years in Queensland and Western Australia before moving to suburban Sydney with her family. She studied communications at Mitchell College, where she became friends with Andrew Denton. She got a job straight out of university at Simon Townsend's Wonder World! before moving to Ray Martin's Midday Show, Beyond 2000, Talkin' About My Generation and The Living Room.