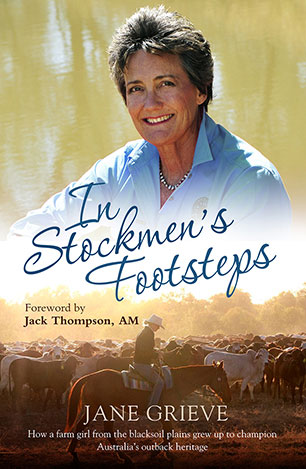 Featuring many of the legends of the Australian outback, this is the extraordinary true story of how one ordinary woman grew up to champion Australia's outback heritage.

Jane Grieve was born and raised on a farm on the Darling Downs in Queensland. She grew up with the wind in her hair and the rich black Darling Downs soil between her barefoot toes, her vivid imagination captivated by the tales of her Colonial forebears and the romantic notion of Australia's outback.

From the outset she was determined that her life was not going to run along conventional lines; and nor did it. While working for architect Bill Durack, brother of legendary Australian identities Mary and Elizabeth Durack, she met R.M. Williams. R.M. exhorted her to work with him, Hugh Sawrey, Mary Durack, Bob Katter Snr, Ranald Chandler, Sir James Walker and other prominent Australians to build a very special monument.

This is the previously untold story of the establishment of one of Australia's foremost Bicentennial projects - the Australian Stockman's Hall of Fame and Outback Heritage Centre - at Longreach in Queensland.

Told through the eyes of a person whose role in the inner sanctum was pivotal to its success, it is an extraordinary true story of the legendary identities, selfless determination and sheer hard work involved in the creation of what was intended as a Mecca for all Australians.
More books by this author

Jane Grieve has been appearing in print media and on the radio as a voice of the countryside for years now. She has written a column on rural living for the Courier Mail and she has had her blog read out on ABC radio. She was featured in November's issue of the Australian Women's Weekly and regularly speaks at various events. She also recently inducted into the Australian Stockman's Hall Of Fame. Jane has also previously self published a book of stories based around her Courier Mail columns.