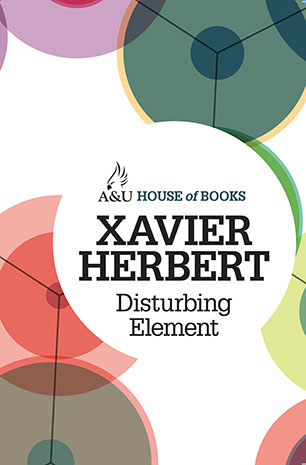 Often comic, often tragic, Disturbing Element is the story of an Australian literary legend written in his own classic style.

Xavier Herbert considers himself the Disturbing Element in the family he claimed never wanted him. Born in 1901 in Western Australia, Herbert grew up amid confusing and sometimes contradictory family legends.

Often comic, often tragic, Disturbing Element traces Herbert's life as he changes careers from pharmacist to railway fettler to writer. This is the story of an Australian literary legend written in his own classic style.

'He writes with the passion of a great lover and a great hater.' - Manning Clark, Canberra Times
More books by this author

Xavier Herbert was one of Australia's leading writers. In 1938 he published his award-winning first novel Capricornia. Herbert's next major work of fiction, Soldiers' Women, was published in 1962. A collection of short stories, Larger Than Life, and Disturbing Element, an autobiography, were both published in 1963. He is perhaps best remembered for his Miles Franklin-winning book Poor Fellow My Country. Published in 1975, this magnificent epic deals with themes of illegitimacy, Australia's postcolonial beginnings and its relationship to Britain, and the terrible treatment and exploitation of the indigenous population.

Known for his insight into, and articulation of, a particularly Australian experience Herbert's writing encompasses complex psychological, historical, social and racial landscapes. He died in 1984.