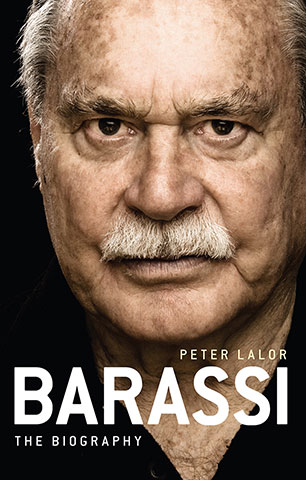 Barassi is Australian Football's first born son, the boy who became its prophet and its messiah. This is a deeply personal portrait of the legend.

His is a biblical tale, appropriate for a game that's a religion.

Ron Barassi was the definitive - some argue first - ruck rover. Together with Norm Smith, he won six premierships in a golden era for the Melbourne Demons. At Carlton and later North Melbourne Ron fulfilled the second part of his destiny. The game's most determined player became its super coach.

Barassi, goes behind the scenes with the game's most revered and most loved figure. It is an examination of an unexamined life. Where did the passion come from? Why did he care so much? How did the events of his early years resonate through the decades? In an era where our sporting heroes are flawed and fallen Ron Barassi is a true icon, a man whose integrity burns bright to this day.

Ron Barassi is a hero for the ages and Barassi is his unforgettable story.

Born in Bendigo, educated in Melbourne and later marooned in Sydney, Peter Lalor is an award winning author and journalist. He has written a number of books including the best-selling Ned Kelly True Crime prize-winning Blood Stain and The Bridge, a history of The Sydney Harbour Bridge. A cricket writer for The Australian newspaper he has worked as a journalist for 25 years.