All This in 60 Minutes 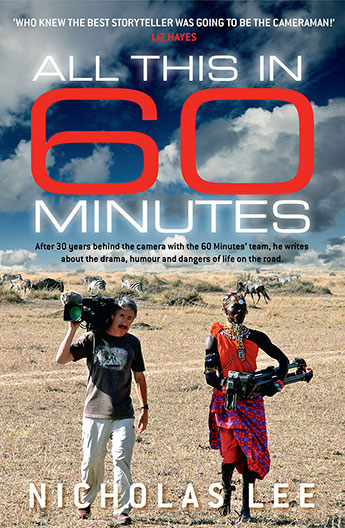 The hilarious inside story of life on the road as a 60 Minutes cameraman.

For more than thirty years Nicholas Lee was a cameraman on 60 Minutes, Australia's most respected and watched current affairs program, alongside Ray Martin, George Negus, Ian Leslie, Richard Carleton, Mike Munro, Jennifer Byrne, Liz Hayes and Tara Brown, among others. All This in 60 Minutes is the revealing and often hilarious memoir of his time with the show - of the crazy days of unlimited expense accounts, of late nights and bleary mornings, the fun and fear on the road, and in the refugee camps and war zones. It goes inside the IRA, Idi Amin's torture cells, and into palaces and mud huts. It recounts unforgettable trips on B-52s, ultra-lights and the Orient Express. And it takes you behind the interviews with the famous and infamous - from presidents, rock stars, despots and kings, to pygmies and manic, charismatic gurus.

The result is a book that is compelling, funny and utterly eye-opening. As Ellen Fanning describes it, All This in 60 Minutes 'Perfectly captures the controlled chaos, the seat-of-the-pants improvisation, the behind the scenes exhilaration of 60 Minutes . All of which goes to prove that often the best bits never make it to the screen.'
More books by this author

Nicholas Lee grew up in Central West NSW and worked as a cameraman for 10 years across a variety of news programs before joining Channel 9's 60 Minutes when it launched in 1979. Over the next 30 years, Nicholas Lee travelled extensively filming and living the world's major news stories, before retiring in 2009. He and his wife Suzanne have two daughters.