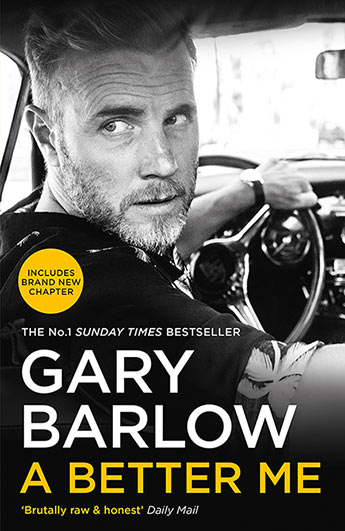 Honest, heartfelt and human, this is the new remarkable memoir from Gary Barlow.

Gary Barlow is one of the most successful British musicians and songwriters of all time, but fifteen years ago, as he himself admits, he hit rock bottom - he was out of shape, out of work and depressed.

Faced with an underperforming solo career, tireless media taunts and the other cruel twists of fate, Gary turned to food. For nine years, he struggled with his weight and went on every diet imaginable before eventually asking a doctor what the 'cure' for obesity was. That was when he realised that he would have to change his life dramatically.

So how did he go from an obese, out-of-work pop star to becoming a hugely successful superstar of music and TV, as well an accomplished musical songwriter and producer who is full of vitality, fitter, happier and more successful than ever before?

In this extraordinarily honest memoir, Gary tells of his journey back to professional success, as well as mental and physical health. A Better Me is a remarkably frank account of Gary's life as he battled with his demons, endured personal tragedy, and staged one of the most thrilling professional comebacks in decades. In his warm, witty and authentic voice, Gary recounts his story with compelling insight, captivating sincerity and a human side that people rarely see.

From returning with a critically and commercially successful Take That and reigniting his own legendary songwriting career, going beyond recorded music to forge success on TV with The X Factor and Let It Shine, to overcoming his weight problems and crippling obsession with food, this is the story of how Gary found balance in both his personal and professional life.

Here is one of the UK's most beloved pop stars, more open, honest and raw than ever before.
More books by this author More books in this series

Gary Barlow is a British singer-songwriter and record producer who found worldwide fame as a member of British pop group Take That. Since forming in 1989 Take That have won eight BRIT awards, sold over 45 million records and over eight million concert tickets. Gary is one of Britain's most successful songwriters, having written 15 Number One singles and being a six-time recipient of an Ivor Novello Award. Aside from his achievements with Take That, he has also co-written and produced music for other renowned artists including Dame Shirley Bassey, Sir Elton John and Robbie Williams.

Gary has released three solo albums over the course of his career, the last of which Since I Saw You Last (his first solo album in over 14 years) became the ninth biggest selling album of the year in the UK.

In 2011 Gary also firmly established himself in the world of UK TV when he agreed to be the Head Judge on The X Factor. A position he held for three years. He then went on to make two documentaries: Journey To Afghanistan and On Her Majesty's Service. In 2016/17 he conceived, produced and starred in his own talent show for the BBC, Let It Shine which sought to find a boy band to be the stars of a new musical.

In more recent years, Gary has also turned his attention to the world of theatre, composing the score for the hugely successful Finding Neverland and working alongside screenwriter Tim Firth to write the music and lyrics for musical The Girls and also more recently working alongside Mark Owen, Howard Donald and Robbie Williams to produce The Band a record-breaking musical featuring the music of Take That.

Gary has also worked closely with a number of charities and key events in recent years including twice organising and performing at BBC Children In Need Rocks. He also organised the Queen's Diamond Jubilee celebrations, which were held in front of the palace in 2012.