Home>Browse>Books>Other books>1599: A Year in the Life of William Shakespeare

1599: A Year in the Life of William Shakespeare 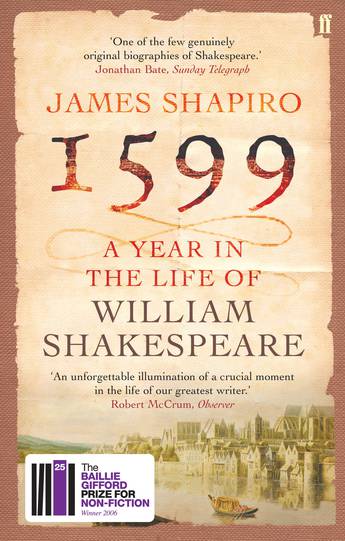 An intimate life of Shakespeare and his age, following him through a single year that changed not only his fortunes but the course of literature

How did Shakespeare go from being a talented writer of comedies and histories to become one of the greatest writers of tragedies who ever lived? In this one exhilarating year we follow what he reads and writes, what he saw and who he worked with as he rebuilds the Globe theatre and writes four of his most famous plays - Henry V, Julius Caesar, As You Like It and, most remarkably, Hamlet.

James Shapiro illuminates both Shakespeare's staggering achievement and what Elizabethans experienced in the course of 1599: sending off an army to crush an Irish rebellion, weathering an Armada threat from Spain, gambling in a fledgling East India Company, and waiting to see who would succeed their ageing and childless Queen.

This book brings the news, intrigue and flavour of the times together with wonderful detail about how Shakespeare worked as a showman, businessman and playwright, to create an exceptionally immediate and gripping account of a fascinating and inspiring moment in history.
More books by this author

Professor James Shapiro, who teaches at Columbia University, is the author of Rival Playwrights, Shakespeare and the Jews and Oberammergau: The Troubling Story of the World's Most Famous Passion Play.