A search for life, a triumph of outback spirit 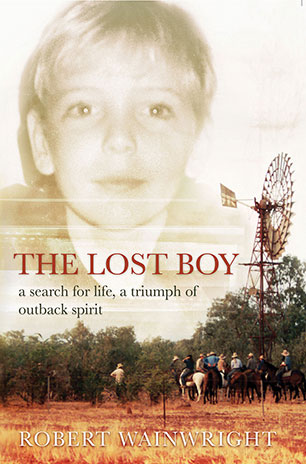 In 1993 8-year-old Clinton Liebelt went missing from a roadhouse between Darwin and Alice Springs - one of the most desolate places in the world. Australian journalist Robert Wainwright's uplifting and triumphant tribute tells the story of how one child's disappearance united an entire community and the wider Northern Territory of Australia.

In the stifling Australian heat of October 1993, a campsite the size of a small town was spontaneously created at a lonely desert roadhouse by the side of the Stuart Highway, which links Darwin with Alice Springs. The 1200 men and women who swagged on the unforgiving ground beside their horses, cars, trucks and even helicopters had come to this isolated place Dunmarra to help solve a mystery and save a life.

A local son had disappeared without a trace. No-one was certain if he had been abducted or lost in the hostile bush around the roadhouse, but all knew it was a search where hours could mean the difference between life and death.

But there was much more at stake. They came from all corners of the far-flung Northern Territory townspeople, stockmen, tourists, police, soldiers and emergency services to help their friends, to forge a community bond and to test themselves, emotionally and physically, in a land untamed by more than a century of European settlement. It would be a desperate search for a life and a triumphant assertion of the human spirit.

Robert Wainwright followed this unfolding drama as a working journalist in 1993 and now, a decade later, he explores the raw, gripping story of an outback family embroiled in one of Australia's biggest manhunts to find that the core of our national identity mateship in troubled times is, indeed, real and alive.
More books by this author

Robert Wainwright has been a journalist for 25 years, rising from the grassroots of country journalism in Western Australia to a senior writer with the The Sydney Morning Herald. His career has ranged from politics to crime, always focussing on the people behind the major news of the day. He is the author of Rose: The unauthorised biography of Rose Hancock Porteous.