The Boy in the Cellar 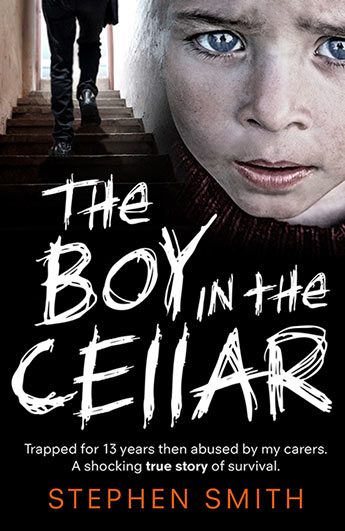 The shocking true story of a boy who spent 13 years locked in a cellar only to flee into the hands of abusers.

Stephen Smith is the boy who did not exist. Born out of wedlock in the early 1960s, Steve's parents - both devout Catholics - had felt so 'shamed' by their son's illegitimate birth that they hid him away from the world by locking him in the cellar...for thirteen years. Apart from a few admissions to hospital as a result of his 'imprisonment', Steve remained in the coal cellar of the family home where he was deprived of daylight, his childhood, school, and human contact until he'd reached his teenage years.

Starved and beaten, the little boy's world was a darkened room that measured just eight feet by ten with a single makeshift bed, bare light bulb, and a solitary table, Steve would spend his days conjuring up an imaginary world full of monsters he would draw to try and block out the physical and mental torture inflicted on him by his brutal father. Locked away like an animal with a bucket to urinate and defecate in the only human contact he received was from his father who'd regularly beat him with a shovel and whip him with a belt.

Eventually, he escaped only to fall prey to the instigators of two of the worst cases of institutional abuse in the UK at Aston Hall hospital and St. William's Catholic School.

A horrifying true story of torture and cruelty that reveals a human's full capacity to fight for survival and search out happiness and hope.
More books by this author More books in this series

Steve Smith is now 57 years old, and the proud father of four children. He is married to wife, Gail, and the couple live on a canal boat where there are also no walls to enclose him. He is the lead singer of a heavy metal band that includes former members of 1970s rock group Hawkwind. Today, instead of being a frightened little boy locked away in a cellar, Steve takes centre stage and sings to audiences of thousands at music festivals around the word. His physical scars from the past may have healed long ago, but by writing his memoir he hopes to heal the psychological ones, too.