A Royal Marine Commando in Action 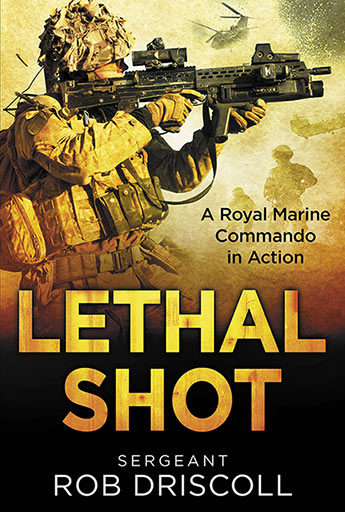 A compelling insight into one of the most controversial rulings in recent military history, and a clear-eyed account of life on active service with the Royal Marines.

Rob Driscoll, former sergeant with 42 Commando, Royal Marines, served tours in Iraq, Kuwait and Kosovo. A born leader of fighting men, with the medals to prove it, he also endured three tours in Afghanistan. The third of those will go down in history as one of the UK military's darkest hours, for it marked the first time a British serviceman has been tried for a murder on the battlefield since the Second World War.

That man was Sergeant Alexander Blackman, Rob Driscoll's friend and fellow NCO in 42 Commando, and on the day in question they were commanding patrols within a few hundred yards of each other. Few men know what really went on that day in Helmand Province. Rob Driscoll is one. And in his book - with Blackman's blessing - he reveals all.

Yet Lethal Shot is more than a compelling insight into one of the most controversial rulings in recent military history. It is a clear-eyed account of life on active service with the Royal Marines, of incursions into war-torn countries where chaos and anarchy ruled - and of risking your life daily for politicians back home who won't support you. In charting its author's career as a Royal Marine Commando, it unflinchingly demonstrates the real-life horrors of engaging at close quarters with enemies such as the Taliban - as well as the dangers that politics can bring to the ordinary fighting serviceman.

Sergeants Blackman and Driscoll were two sides of the same coin. One came home a hero, the other a wanted man. But for circumstance, it might have been the other way round.
More books by this author
Category: True Crime
ISBN: 9781786062543
Publisher: Bonnier
Imprint: John Blake
Page Extent: 336
Format: Hard Cover
Subject: True crime