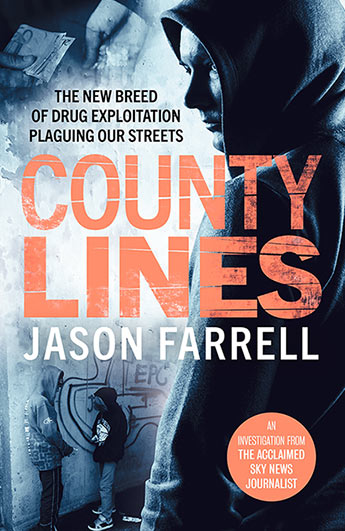 County Lines - the new breed of exploitation plaguing the streets of a town near you.

County Lines - the new breed of exploitation plaguing the streets of a town near you.

If you've heard any news report on the upsurge in knife crime recently, you'll have heard the words 'county lines'. From the street slang that was once known as 'going country' - it sees powerful drugs gangs supplying outside of the capital through an underworld 'emerging markets enterprise', using children as young as 12 and vulnerable men and women to do their dirty work.

Teens whose bereaved relatives assume they led ordinary lives, who tell us they were 'good kids', suddenly end up stabbed to death with no seeming motive. At night, on a usually quiet suburban street, a massive knife fight erupts and two kids end up on life support. Their parents tell the news they weren't in a gang... What is really going on?

Jason Farrell, Home Editor at Sky News, is the man with the inside story. In this fearless, hard-hitting account, Farrell shares in terrifying detail the story of the county lines phenomenon through the words of gang members and their victims themselves as well as the police and the country's leading experts.

Through exclusive interviews and meticulous research, Farrell paints a vivid picture of how this murky world operates he reveals the devastating effects County Lines is having upon the UK... and beyond... and, most terrifying of all, why this new, sinister crime wave means nobody is safe.
More books by this author

Jason Farrell is Home Editor of Sky News and has been nominated three times as Specialist Journalist of the Year by the Royal Television Society (RTS). Most recently in 2018 he was shortlisted for his ground-breaking investigation into the drug Primodos. His documentary Primodos: The Secret Drug Scandal was nominated as current affairs programme of the year. The film's revelations were applauded by reviewers and led to headlines around the world. It has also prompted a new government review into the medicine.

Most recently he has conducted investigations into County Lines drug dealing, the Telford child abuse scandal, schools 'off-rolling' difficult children and the Far Right. Previously, he was a Senior Political Correspondent at Sky News. He covered the 2014 Scottish referendum, the 2015 general election and the 2016 Brexit referendum, interviewing all the key politicians along the way including David Cameron during his renegotiations and Boris Johnson, as he campaigned on the infamous red bus. He travelled with Jeremy Corbyn's campaign in the 2017 election and accompanied Theresa May on diplomatic missions to Japan, India, Iraq, Saudi Arabia and Jordan.

Prior to politics Jason was a crime and investigations correspondent heading up an investigative team at Sky News that produced numerous scoops including uncovering the misselling of Swaps by high street banks that would eventually lead to big industry pay-outs. He also covered major breaking home and international news stories from the disappearance of Madeleine McCann to terrorist attacks in the UK and abroad, the Grenfell fire and the financial crisis in southern Europe. He has made several documentaries for Sky News including, The Raqqa Resistance and Brussels Terror Central. He also directed and presented the independent film Running With Bulls. Jason is co-author of the book How to Lose A Referendum (Biteback, 2017) which is considered one of the best independent explanations of the reasons behind Brexit. Prior to Sky News, Jason worked for Five News, ITV News and the BBC.