Whatever You do Don't Run

My adventures as a Botswana safari guide 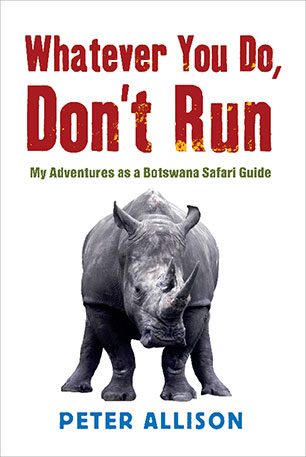 The warm, funny and utterly engaging true story of a young Aussie safari guide who has spent the last twelve years leading tours in the African bush.

Peter Allison was only nineteen when he left Australia for Africa, thinking he might travel around and see a bit of the country before going home to a 'proper job'. But Africa worked its magic, and Peter ended up falling, quickly and completely, in love with the country and its wildlife. Landing in a game reserve in the wildlife-rich Okavango Delta, he became a safari guide and, some twelve years later, his short holiday in Africa isn't over yet.

Whatever You Do, Don't Run is his guide's-eye view of living in the bush, confronting the world's fiercest animals and, most challenging of all, managing herds of gaping tourists. Like the young woman who rejected the recommended safari-friendly khaki to wear a more 'fashionable' hot pink ensemble, or the Japanese tourist who requested a repeat performance of Allison's being charged by a lion so he could videotape it.

Peter Allison - like an affable, younger David Attenborough or a slightly more laid-back Steve Irwin - really knows his wildlife. He's had some extraordinary, once-in-a-lifetime experiences. From close encounters with hungry lions, cranky elephants and over-protective honey badgers, there's not much in the African bush that Peter hasn't seen, done or been chased by. His affection for these wild and dangerous animals and his fascination with, and respect for, their often extraordinary behaviour is completely genuine, deep and infectious. Reading Whatever You Do, Don't Run is like sitting around a campfire late at night and listening to him talking - his stories of the animals and the bush are gentle, warm, funny and utterly engaging.
More books by this author

Peter Allison was born in Sydney, Australia. He trained to be a safari guide in the early 1990s and soon thereafter was hired by southern Africa's largest operator to train all of their safari experts. Safaris he has led have been featured in magazines such as Vogue and Conde Nast Traveler (which described him as 'silver-tongued'). He has assisted National Geographic photographers, and has appeared on television shows such as Jack Hannah's Animal Adventures. He has extensive public-speaking experience, and is active with the Athena Foundation, a nonprofit conservation group. He currently divides his time between Australia, California, and Botswana.

Whatever you do, don't run

How I got my name

Beau goes back to nature

The fool and the snake

A night in the Magkadigkadi

A friend in hand

Bale and the snake