Me, Myself and Prague

An unreliable guide to Bohemia 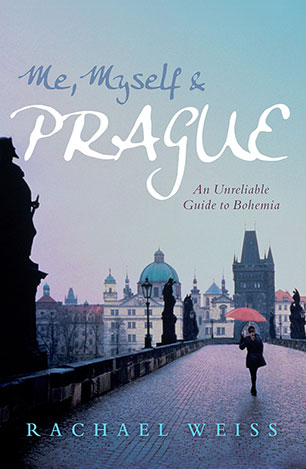 Armed only with a romantic soul and a 1973 guide to communist Czechoslovakia, Rachael Weiss heads off in search of adventure, love and her Bohemian roots in this funny, flippant and fabulous story of her year of living and loving in Prague.

I tripped across the Charles Bridge just before first light, all alone apart from a sleepy pickpocket just clocking on for the morning shift, my heels clacking on the cobblestones, the early morning sky a beautiful deep blue.

Armed only with a romantic soul and a pressing need to escape her overbearing family, Rachael Weiss heads for Prague in search of her Bohemian roots, with vague plans to write the next great Australian novel and perhaps, just perhaps, fall madly in love with an exotic Czech man with high cheekbones.

They make it seem so easy, those other women who write of uprooting themselves from everything they know, crossing the world and forming effortless friendships with strangers, despite not understanding a word they say, while reinventing themselves in beautiful European cities. So it's not surprising that Rachael is completely unprepared for the realities that confront her in her strange new world. Initially starry-eyed, she quickly has to grapple with perplexing plumbing, extraordinarily rude checkout chicks, and the near-incomprehensible Czech language.

In this warm and witty tale of life in a foreign land, Rachael, somewhat to her own surprise, finds herself gradually creating a second home in Prague, complete with an eccentric and unlikely tribe of extended family and friends; and realises along the way that while she's been striving so hard to become someone else, she has inadvertently grown to rather like the person she has always been.

Me, Myself + Prague is a sweet and surprising memoir of discovering hope, self, family and friendship, Czech-style.
More books by this author

Rachael Weiss worked as a secretary before finding her voice and getting her first book published. She currently lives in Prague where she is technically the in-house writer for a hotel but, since the only thing she has to write is the website and occasional stiff letters to defaulting customers, in reality she's the odd-jobs girl. She supplements her income by writing horoscopes for a series of obscure suburban and specialist papers and thus feels justified in describing herself as a syndicated columnist. Rachael's greatest achievement to date is a fourth place in the New South Wales Scrabble tournament. One day she hopes to play Czech Scrabble. She is the author of Are We There Yet (Allen + Unwin, 2005).