How to Walk a Puma

My (mis)adventures in South America 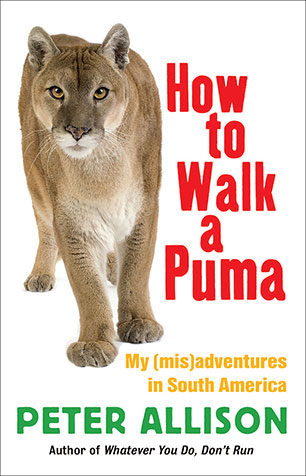 An intrepid African safari guide sets out to discover all he can about the wildlife of the South American continent in a hilarious book about walking pumas (can be dangerous), chasing jaguars (can be elusive) and finding love (can be tricky).

Plans are usually only good for one thing - laughing at in hindsight. So, armed with rudimentary Spanish, dangerous levels of curiosity and a record of poor judgement, I set off to tackle whatever South America could throw at me.

Not content with regular encounters with dangerous animals on one continent, Peter Allison decided to get up close and personal with some seriously scary animals on another.

Unlike in Africa, where all Peter's experiences had been safari based, he planned to vary things up in South America, getting involved with conservation projects as well as seeking out 'the wildest and rarest wildlife experiences on offer'.

From learning to walk - or rather be bitten and dragged along at speed by - a puma in Bolivia, to searching for elusive jaguars in Brazil, finding love in Patagonia, and hunting naked with the remote Huaorani people in Ecuador, How to Walk a Puma is Peter's fascinating and often hilarious account of his adventures and misadventures in South America.

'His misadventures make Whatever You Do, Don't Run an absorbing read . The material is rich, and Allison is a gifted storyteller.' - National Geographic Adventures

'Enough adventure, action, life lessons, and laughs to fill a movie and four sequels. The fact that Allison survived to write any of this down is a miracle in itself.' - Cash Peters, author of Naked in Dangerous Places and Gullible's Travels

Peter Allison has led safaris in South Africa, Botswana and Namibia. It was his love of animals that first led Peter to Africa at the age of 19, and by the late 1990s he'd graduated from being a safari guide himself to leading the training of guides for the region's largest safari operator. Peter has led safaris that have featured in such magazines as Vogue and Conde Nast Traveller. He has also assisted National Geographic photographers and appeared on television shows such as Jack Hanna's Animal Adventures. In between globetrotting the world as a marketeer for Africa's leading safari company, Peter divides his time between Sydney and Cape Town.