The Ultimate Encyclopedia of Boxing 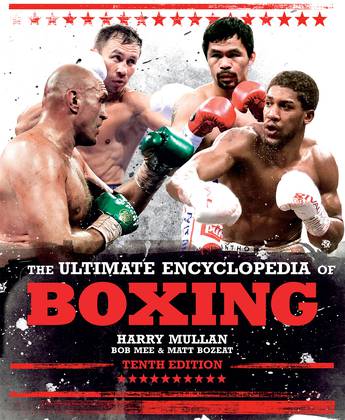 This ninth edition of The Ultimate Encyclopedia of Boxing is fully revised and updated to include every major world title fight up to the end of March 2020, together with biographies of modern great champions and reports on outstanding recent fights.

The Ultimate Encyclopedia of Boxing is the world's most comprehensive single-volume illustrated work of boxing reference, covering all aspects of the sport since its rise from the days of illegal big-money challenge matches to the multi-million-dollar televised extravaganza it is today.

As well as details of the careers of the world's greatest boxers, and descriptions of many of the outstanding fights, it traces the progress of the world title from champion to champion in all the weight classes, outlines the status of boxing around the world, considers the prominent figures behind the scenes such as promoters, trainers and managers, recalls some of the great stadiums where boxing history was made, and details the administrative bodies, the rules, the culture and ambience of the fight game, including its occasional tragedies, along with its scandals. A statistical section lists the facts, figures and oddities of the sport.

Fully revised and updated to include all the world title fights up to March 2020, there are new biographies and features on the recent big changes in the sport.
More books by this author

Harry Mullan, who passed away in 1999, was acknowledged as a world authority on boxing. He edited Boxing News, the world's oldest publication devoted to the sport, and appeared frequently on television and radio. He was boxing correspondent of the Sunday Times and the Independent on Sunday.

Bob Mee is a boxing writer and former boxing correspondent for the Independent. He has penned a number of books, including Bare Fists, Boxing Hall of Fame, British Professional Boxers' Records, the Heavyweights and Boxing: Heroes and Champions.

Matt Bozeat has covered boxing for more than 20 years. A freelance journalist for more than a decade, he has reported on boxing for Sky Sports and written for Boxing News, as well as a number of other national publications.