The Little Book of Man City 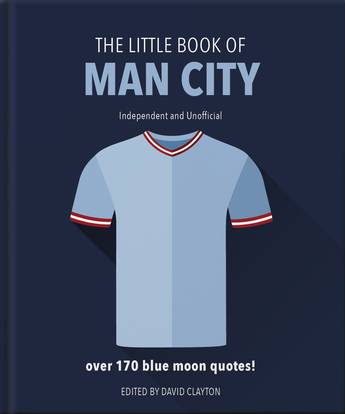 A collection of words of wit and wisdom by and about the managers, players and officials of Manchester City Football Club.

Manchester City stormed to the clubs fourth Premier League title in 2019, the fourth championship in seven seasons, which is a far cry from the 44-year wait which ended in 2012! It is hard to believe that less than 20 years ago, City were in what is now League One. Their loyal fans spent so many years riding on the wildest roller-coaster in English football, with so many ups and downs that they hardly knew in which division they were competing, but things have changed and now City are among not only England's elite, but also Europe's.

This incredible journey is recorded in this updated edition of The Little Book of Man City, a selection of the wit and wisdom of the great characters who have been associated with the club. From managers, such as Malcolm Allison, Kevin Keegan, Roberto Mancini and Pep Guardiola, via garrulous fans such as Radio 1's Mark and Lard and the Gallagher brothers to voluble players such as Francis Lee, Dennis Tueart, Rodney Marsh, Kun Aguero and Vincent Kompany, here are more than 170 funny and biting quotes for the avid fan of 'the only club in Manchester'. As their chaplain once said, 'Imagine where City would be if I hadn't been praying for them all these years.'
More books by this author More books in this series
Category: Sport
ISBN: 9781911610359
Table Of Contents: Quotes from more than 100 legendary characters who have made Manchester City one of the most interesting clubs in English football. From Francis Lee and Malcolm Allison, to Roberto Mancini, Pep Guardiola, Sergio Aguero and Vincent Kompany, together with the thoughts of famous fans, such as the Gallagher brothers, every aspect of the life of a Manchester City player or supporter is shown in true sky blue moon colour.
Publisher: Welbeck
Imprint: Orange Hippo
Page Extent: 192
Format: Hard Cover
Subject: Sports & outdoor recreation