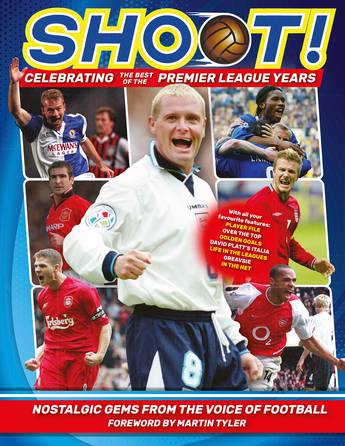 Filled with Shoot! regular features, such as 'Focus On', 'Ask the Expert', 'Shoot Us a Line', 'At Home with the Stars' and 'Football Funnies', this is an ideal gift for footy fans of all ages.

Shoot! broke new ground as a football magazine when it first hit the shelves in August 1969. It was written for the younger fan, but mixed serious issues with lighter items. Liberally sprinkled with action photographs, some in full colour, it brought football to life and was bought every week by tens of thousands of fans eager to see their heroes in all their glory.

For the more seasoned football supporter, Shoot! The Premier League will bring back fond memories of a time when coiffure came with curtains, football shirts were seriously capacious and Gazza managed to single-handedly resurrect the game by bursting into tears. They'll recall the days when Robbie Fowler favoured a pugnacious nose plaster, David Ginola was supremely confident he was 'worth it' and Football Italia graced our TV screens. Ah, what a time it was to be alive! And for post-millennials, this will be a history lesson, proof positive that their dad's heroes really did exist - and weren't half bad either.

Shoot! has seen numerous rivals come and go. Haircuts and fashion styles have changed, players have become more pampered and otherworldly but football remains 11 vs 11 (until the cards come flying out) and it is still the greatest sport in the world.
More books by this author

Adrian Besley is the author of the humorous titles Who Do You Think You Are Kidding Mr Klinsmann? and The Fatkins Diet. His other football books include Superstars of the World Cup 2006, World Football Infographics and two titles in Welbeck's popular Ultimate Fan Guide series: Mohamed Salah and Harry Kane. He was also the general editor of the sister volume to this title, 50 Years of Shoot!

Category: Sport
ISBN: 9781787394957
Table Of Contents: The book comprises a selection of page lifts from back issues of the magazine from the period from 1990 to the present day, featuring everybody's favourite weekly features, such as 'Ask The Expert', 'Focus On', 'Football Funnies' and 'Shoot Us A Line' etc., and stories and action photographs from the key issues of the day.
Publisher: Welbeck
Imprint: Welbeck
Page Extent: 176
Format: Hard Cover
Subject: Sports & outdoor recreation