The New Testament In Scots 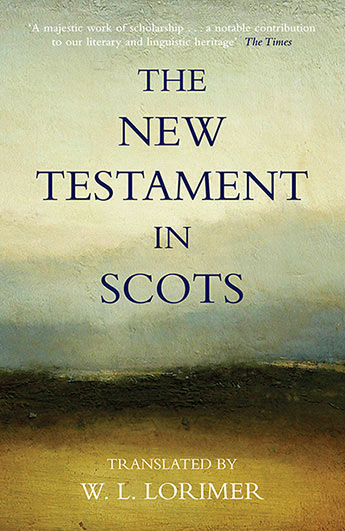 'A great literary achievement in its own right. [that] not only restores life to Scots but to the New Testament itself.' - Scotsman

The Greek scholar William Lorimer spent the last ten years of his life working on this project. Each Gospel has a different form of Scots to match the different forms of Greek used by the various apostles and scribes, and the vigour and immediacy of the language is everywhere apparent.

Transcribed, edited and published by his son Robin Lorimer, this scholarly and dramatically fresh reading of an already familiar text caused a sensation when it first appeared in 1983. Beyond the poetry of the King James version, here are the voices of the disciples themselves, speaking, as they undoubtedly did, in 'plain braid Galilee'.
More books by this author

William Lorimer (1885-1967) was born at Strathmartinc, near Dundee, and spent most of his life teaching, first as Lecturer in Greek at St Andrews University, then as Reader in Humanity at University College, Dundee, and finally for two years (1953-5) as Professor of Greek at St Andrews. Though best known as one of the most learned Greek scholars of his generation, he had first begun studying spoken Scots when he was only nine years old. During the last twenty years of his life, he made a substantial contribution to The Scottish National Dictionary; during the last ten, he also translated the New Testament from Greek into Scots, but had not finally revised three-quarters of his voluminous manuscripts when he died. His son R. L. C. Lorimer (1918-96), a distinguished publisher and scholar in his own right, completed the transcription and the editing of the work which was published to great acclaim in 1983.