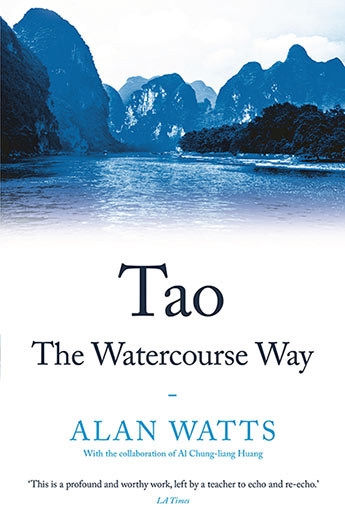 The last work by Alan Watts, Tao is the culmination of a lifetime's study and thought.

Following Alan Watts' acclaimed book on Zen Buddhism The Way of Zen, he tackles the Chinese philosophy of Tao.

The Tao is the way of man's cooperation with the natural course of the natural world. Alan Watts takes the reader through the history of Tao and its interpretations by key thinkers such as Lao-Tzu, author of the Tao Te Ching. Watts goes on to demonstrate how the ancient and timeless Chinese wisdom of Tao promotes the idea of following a life lived according to the natural world and goes against our goal-oriented ideas by allowing time to quiet our minds and observe the world rather than imposing ourselves on it. By taking in some of the lessons of Tao, we can change our attitude to the way we live.

Drawing on ancient and modern sources, Watts treats the Chinese philosophy of Tao in much the same way as he did Zen Buddhism in his classic The Way of Zen. Including an introduction to the Chinese culture that is the foundation of the Tao, this is one of Alan Watts' best-loved works.
More books by this author

Alan Watts was a philosopher, academic and theologian, who wrote and spoke widely on Asian philosophy and theology. He became a cult figure in the 50s and 60s, lecturing and presenting radio shows in San Francisco and the Bay Area. His ideas especially gained a following in counter-cultural circles, including among the Beat generation. He is best known as an interpreter of Zen Buddhism in particular, and of Indian and Chinese philosophy in general. He was the author of more than twenty books on the philosophy and psychology of religion including Behold the Spirit, The Way of Zen, and Cloud-Hidden, Whereabouts Unknown: A Mountain Journal. He died in 1973.