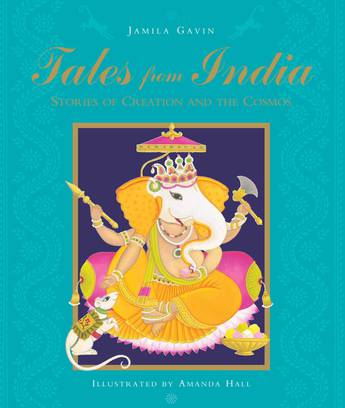 Come on a journey through the cosmos to witness the wonders of creation with master storyteller Jamila Gavin. In this beautiful volume, cherished Hindu tales are given a new voice, as stories of great floods, evil kings, beautiful princesses and epic battles between good and evil leap from the pages.

Illuminated by winning artist Amanda Hall's sumptuous illustrations, which show influences from both contemporary and classical Indian art, this magnificent collection will delight and intrigue readers in equal measure.
More books by this author

Jamila Gavin (Author)
Jamila Gavin was born in Mussoorie, India, and moved to England with her family when she was eleven. She has been writing bestselling children's books since 1979 and her many works include The Surya Trilogy, the first volume of which was a special runner-up for the 1992 Guardian Children's Fiction Award. She won the Whitbread Children's Book of the Year Award in 2000 for her novel Coram Boy.

Amanda Hall (Illustrator)
Amanda Hall lives in England and works in a timber shed at the bottom of her garden. Since studying at the Cambridge School of Art, Amanda has illustrated many books for children, including the popular StoryWorld storytelling series for Templar Publishing. The inspiration for Amanda's work comes from cultures all over the world, especially the myths, legends and fairy tales of India, Africa, and North and South America.