My Door Is Always Open

A Conversation on Faith, Hope and the Church in a Time of Change 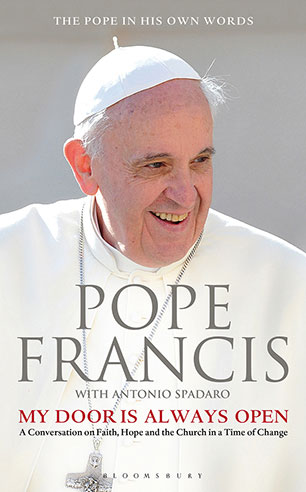 The first book published by Pope Francis, giving a fascinating and thoughtful insight to his vision of the modern-day Roman Catholic Church

My Door is Always Open is the complete and definitive set of interviews between Pope Francis and Jesuit priest Antonio Spadaro.

In the summer of 2013, Pope Francis gave three extended interviews to Spadaro, the head of La Civilt. Cattolica (Catholic Civilisation), a Catholic periodical based in Rome, in which he spoke at length about his background, his Faith, and his vision for the Roman Catholic Church. Here, at last, is the complete collection of the interviews with a full commentary by Spadaro, the interlocutor and commentator.

In this compelling and engrossing dialogue, Antonio Spadaro introduces a Pope of great intellect and intelligence, who for the first time gives a rounded and substantial account of where he may lead the Roman Catholic Church in the years to come. Insightful and sincere, Pope Francis expounds upon the contemporary issues facing the Church, including the role of women and his experiences at the heart of Church governance, and he and Spadaro discuss at length the major issues facing religion around the world.

Including accounts of Pope Francis' visit to Brazil for World Youth Week, My Door is Always Open is the first book written by the Pope since he was elected and is the most convincing and persuasive guide to Pope Francis's vision as one of the most charismatic figures of our time.
More books by this author

Pope Francis (Jorge Mario Bergoglio) was born in Buenos Aires in 1936, the son of a railwayman. He joined the Society of Jesus (Jesuits) at the age of 21 and was ordained a priest in 1969. He was elected Archbishop of Buenos Aires in 1998 and was created cardinal by Pope John Paul II in 2001 with the title of cardinal priest of San Roberto Bellarmino. He was elected the 266th Pope in March 2013.

Antonio Spadaro was born in Sicily in 1966. After graduating from Messina University he joined the Society of Jesus (Jesuits). He earned a doctorate from the Pontifical Gregorian University in Rome, where now he teaches at the Theological Faculty. In 2011 he was appointed Consultor of the Pontifical Council for Culture and of the Pontifical Council of Social Communication by Pope Benedict XVI. He currently lives in Rome where he is the director of the long-standing periodical La Civilt. Cattolica.