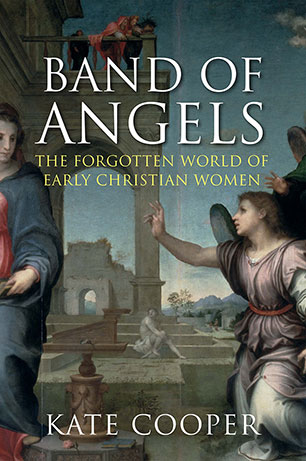 The story of the beginnings of Christianity, told as never before. Band of Angels uncovers the vital role women played in spreading the Christian religion and seeks to restore their rightful place in history.

In Band of Angels, Kate Cooper tells the surprising story of early Christianity from the woman's point of view. Though they are often forgotten, women from all walks of life played an invaluable role in Christianity's growth to become a world religion. Peasants, empresses, and independent businesswomen contributed what they could to an emotional revolution unlike anything the ancient world had ever seen. By mobilizing friends and family to spread the word from household to household, they created a wave of change not unlike modern 'viral' marketing.

For the most part, women in the ancient world lived out their lives almost invisibly in a man's world. Piecing together their history from the few contemporary accounts that have survived requires painstaking detective work. Yet a careful re-reading of ancient sources yields a vivid picture, and shows how daily life and the larger currents of history shaped one another.

This remarkable book tells the story of how a new way of understanding relationships took root in the ancient world. By sharing the ideas that had inspired them, ancient women changed their own lives. But they did something more: they changed the world around them, and in doing so, they created an enduring legacy. Their story is a testament to what invisible people can achieve, and to how the power of ideas can change history.
More books by this author

Kate Cooper is Professor of Ancient History at the University of Manchester. Her academic titles have explored the role of virgins in early Christianity (The Virgin and the Bride) and of women and the family during the decline and fall of the Roman Empire (The Fall of the Roman Household). Born in Washington, DC and educated at Princeton, Harvard and Wesleyan universities, she is a Rome Prize winner and Fellow of the American Academy in Rome.