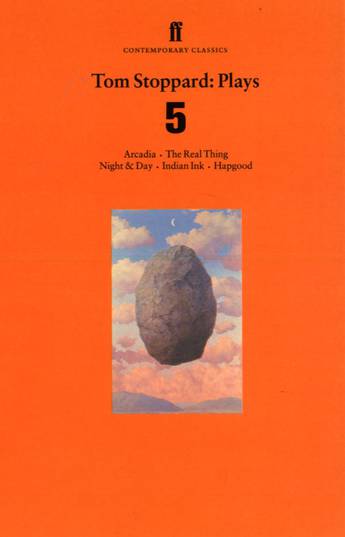 Download cover
Availability: Not available to order from this website, please try another retailer
This fifth collection of Tom Stoppard's plays brings together five classic plays by one of the most celebrated dramatists writing in the English language.

'I have never left a new play more convinced that I'd just witnessed a masterpiece.' Daily Telegraph

'.he (Stoppard) combines some fly Pirandellian games with an unequivocal statement about the joyousness of shared passion. And the result is that rare thing in the West End: an intelligent play about love.' Guardian

'How excellent it is to leave a theatre thinking as this play makes you think.' Financial Times

'Hapgood is a new variation on one of Stoppard's abiding themes: the black romance of reality and appearance. This is a metaphysical spy-thriller, intricate, elegant and lucid.for sheer intellectual excitement, Hapgood has no rival.' Sunday Times

Tom Stoppard was born in 1937 in Czechoslovakia. His early years were spent in Singapore, India and, from 1946, England, after his mother married an officer in the British Army. Leaving school at seventeen, Stoppard worked as a reporter in Bristol, before moving to London to work as a theatre critic and feature writer. During this period he began to write plays for radio and for the stage and published his only novel, Lord Malquist and Mr Moon.His first major success, Rosencrantz and Guildenstern are Dead, was produced in London in 1967 at the Old Vic after critical acclaim at the Edinburgh Festival. Subsequent plays include Enter a Free Man, The Real Inspector Hound, Jumpers, Travesties, Night and Day, Every Good Boy Deserves Favour (with Andre Previn), After Magritte, Dirty Linen, The Real Thing, Hapgood, Arcadia, Indian Ink and The Invention of Love. His radio pla