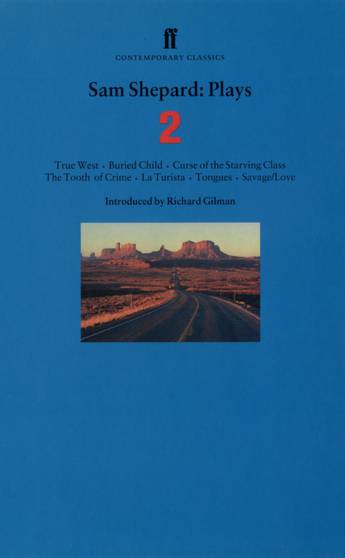 A volume of Sam Shepard plays, including the Pulitzer prize-winning Buried Child

Sam Shepard has been described by the New Yorker as 'one of the most original, prolific and gifted dramatists at work today'. Here are seven of his finest plays, including True West and the Pulizter Prize-winning Buried Child.

True West: 'A mythic study of fraternal division.What makes the play so rich is Shepard's profound understanding of the spiritual incompleteness of each brother and, by extension, of the American experience.' Guardian

Buried Child: The play has a 'rhythmic sense of speech and imagery that finds the dark, scary poetry behind every domestic arrangement.a startlingly visceral experience.it operates successfully on so many levels that you get dizzy watching it.' New York Times

Sam Shepard has gained a reputation as one of America's foremost living playwrights. In over forty plays, Shepard has broken down traditional notions of dramaturgy in combining both modernist notions of the absurd and familiar icons from the American cultural landscape with an energy tinged by anarchy and violence. His self-styled rock-and-roll aesthetic has informed not just his writing, but has generated a public persona which looms as large as, or larger than, his body of written work.