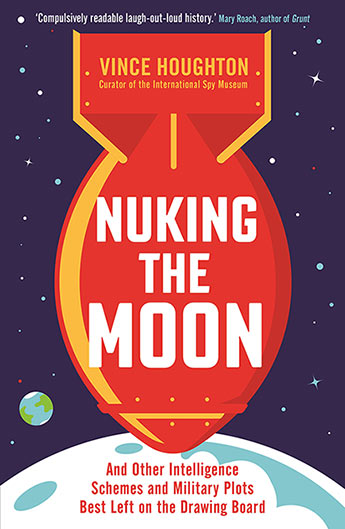 Agent Zigzag meets The Book of Heroic Failures and The GCHQ Quiz Book.

Bomb-carrying bats. Poisoned flower arrangements. Cigars laced with mind-altering drugs. Listening devices implanted into specially-trained cats. A torpedo-proof aircraft carrier made out of ice and sawdust. And a CIA plan to detonate a nuclear bomb on the moon ... just because.

In Nuking the Moon, Vince Houghton, Historian and Curator at the International Spy Museum, collects the most inspired, implausible and downright bizarre military intelligence schemes that never quite made it off the drawing board. From the grandly ambitious to the truly devious, they illuminate a new side of warfare, revealing how a combination of desperation and innovation led not only to daring missions and brilliant technological advances, but to countless plans and experiments that failed spectacularly.

Alternatively terrifying and hilarious, and combining archival research with newly-conducted interviews, these twenty-six chapters reveal not only what might have happened, but also what each one tells us about the history and people around it. If 'military intelligence' makes you think of James Bond and ingenious exploding gadgets ... get ready for the true story.
More books by this author

Dr. Vincent Houghton is the Historian and Curator of the International Spy Museum in Washington, DC. He is also the host and creative director of the Museum's podcast, SpyCast, which reaches a national and international audience of over 3.5 million listeners each year. He is a veteran of the US army and served in the Balkans before receiving his Masters and PhD in Diplomatic and Military History from the University of Maryland. He has appeared on CNN, NBC News, Fox News, NPR and other major outlets as an expert in intelligence history.