The Lost Tarot of Nostradamus 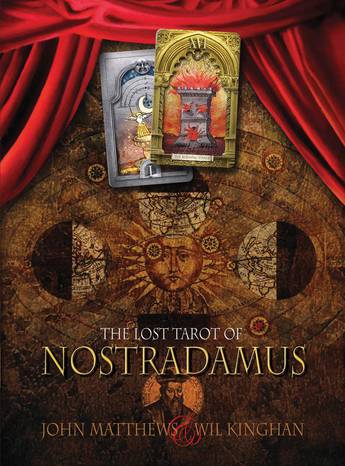 For the first time, the astounding power of Michel de Nostredame's prophecies is married to the predictive imagery of the Tarot.

Michel de Nostredame, sixteenth-century French apothecary and seer, was the most famous visionary of them all. In 1994, in the Italian National Library in Rome, a manuscript believed to be by the man himself was discovered along with 80 mysterious paintings drawing heavily on the symbolism of the tarot. John Matthews and Wil Kinghan realized the implications of this work and, after much research, now bring it to fruition.

For the first time, the astounding power of the prophecies is married to the predictive imagery of the Tarot. Fresh translations from the original quatrains add another dimension to the readings making this, without question, the ultimate oracle from the primary prognosticator.
More books by this author

John Matthews has produced a number of successful divinatory systems based on early spiritual beliefs - including the best-selling Arthurian Tarot (with Caitlin Matthews and Miranda Gray), The Wildwood Tarot (with Mark Ryan and Will Worthington), The Green Man Tree Oracle (with Will Worthington), The Celtic Animal Oracle and Grail Tarot (with Giovanni Casselli). His book, Pirates, was No 1 in the New York Times Book Review and a bestseller for 22 weeks in 2007.

Wil Kinghan is a writer, artist and explorer of the Hermetic and Celtic traditions. He studied Archaeology at University College Dublin and Environmental Design at NCAD in the 1980s. He then worked in advertising and commercial art as an Art Director, winning awards for various campaigns such as for Guinness in the 1990s. He left advertising to form his own company and develop his art and writing. He recently completed work on several writing and illustration projects including The Shaman's Oracle (Watkins) and The Ancestor Oracle (Watkins).