We Band of Brothers

A biography of Ralph Honner, soldier and statesman 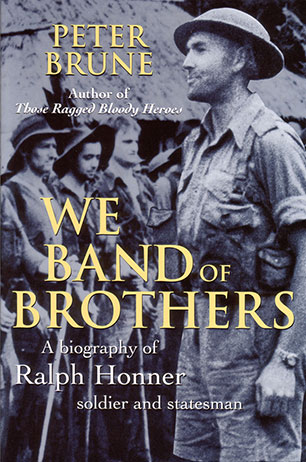 The biography of Lieutenant Ralph Honner, one of Australia's best-known soldiers from World War 2.

We Band of Brothers is the story of Lieutenant-Colonel Ralph Honner, one of Australia's great World War II battalion commanders.

Honner fought as a junior officer in the first and triumphant North African battles of Bardia, Tobruk and Derna. He then took part in the heartbreaking and disastrous campaigns in Greece and Crete where he was one of the last Australians to be evacuated by submarine-three months after Crete's fall.

But it was during 1942, at Isurava on the Kokoda Trail and at the Japanese beachhead of Gona in Papua New Guinea, that Ralph Honner played a decisive role in the making of an Australian legend. Worshipped by his men, he was severely wounded in 1943 and, after a long convalescence, served Australia with distinction as a public servant, political figure and diplomat.

Written by one of Australia's bestselling military history authors, who knew Ralph Honner and had access to his private letters and papers, We Band of Brothers contains gripping, action-packed descriptions of the fighting in North Africa, Greece, Crete and Papua New Guinea. The story of a remarkable man, it covers events from Honner's adolescence in the last vestiges of pioneering Australia through to his distinguished political and diplomatic career, spanning nearly a century of his nation's history.
More books by this author

Peter Brune has written extensively on the Papuan Campaigns. He is the author of the best-selling Those Ragged Bloody Heroes, Gona's Gone!, and The Spell Broken, and the co-author of 200 Shots: Damien Parer, George Silk and the Australians at war in New Guinea.

1 Born of the Great Hunger

3 It's a confidence business

4 These war correspondents amuse us

10 Once more unto the breach