The Navy and the Nation

The influence of the Navy on modern Australia 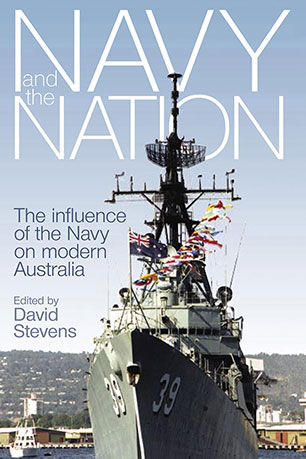 A history of the Australian navy focusing on the contribution of the RAN in peace and war to Australia's development and the potential it has to continue this into the future.

Australia has often been described as a nation shaped by war. From an early age, every Australian is taught the significance of Gallipoli and the Anzac legend. This, however, is but one dimension of the military's impact on our nation's coming of age. Australia, after all, is an island. It was the Navy which explored and founded European Australia, and it is the Navy which has been critical to our national security ever since.

With its ancestry in the Royal Navy and the former colony-based navies, the Australian Navy was established in 1901. Since that time it has helped Australia enter the international community as a modern, self-reliant nation and has been indispensable in protecting Australia's sovereignty and national interests.

Despite the Navy being one of Australia's oldest and most important institutions, the links between nation-building and the Navy have never before received detailed study. Bringing together scholars from Australia and overseas, The Navy and the Nation examines the extent of the Navy's contribution to our national development and shows how the Navy has played a vital role in defining our independent national identity.
More books by this author

A former naval officer, David Stevens is a graduate of the University of New South Wales and the Australian National University, and is currently Director of Strategic and Historical Studies within the Sea Power Centre - Australia. He has written and edited several books on maritime strategy and naval history.

John Reeve is Senior Lecturer and Osborne Fellow in Naval History at the University of New South Wales at the Australian Defence Force Academy. He has written extensively on early modern and contemporary diplomatic and strategic issues.

Introduction: the Navy and the birth of the nation - David Stevens and John Reeve1

Part I Concepts and contexts 9

1 The Navy for the nation: a shared responsibility - George Baer11

2 The Royal Navy in the Pacific: sea power and imperial endeavour - Geoffrey Till 23

Part II The Navy and the nation 67