Stories from my radio days in the bush 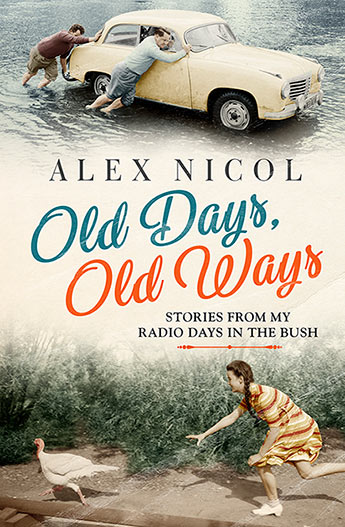 Former ABC Radio presenter Alex Nicol brings back to life the voices and stories of regional Australia before television and the internet.

Alex Nicol takes us back to the old days in the bush, when booking into a country pub was likely to turn into an adventure, and when radio was the glue that held far flung communities together.

Full of colourful characters and making do with what's at hand, these stories are classically Australian. There are the wartime mates who helped each other build farms on their soldier settler blocks, and the 'Adelady' keeping the farm running after her husband died. There is the young woman who ran down water buffalo in the Northern Territory, and Possum, the legendary bush hermit who lived off the land on his own for 60 years, quietly doing jobs for farmers without being asked. There is the neighbour caught 'fishing' in the chookyard with a long line and a small hook baited with bread, and the little girl who swallowed a sapphire she found on the side of the road.

With a bush yarn, it's all about the way you tell it. As the voice of rural Australia for over two decades on ABC radio, Alex Nicol can tell a yarn with a punchline that will keep you grinning for the rest of the day.

'Alex Nicol's Old Days, Old Ways evokes and celebrates those unmistakeable national qualities that set us apart and that reside in the common man and woman.' - Ian 'Macca' McNamara, Australia All Over
More books by this author

Alex Nicol was ABC's first rural radio presenter. He started at the ABC in 1967, and was presenter of the 'All Ways on Sunday' program, and later manager of ABC Orange. He has worked as a jackaroo, as a sheep and wool officer for the NSW Department of Agriculture, as an agriculture college teacher, and on the Australian Wheat Board. Alex is also a playwright, and his plays have been produced in London, New York, Melbourne and Sydney, with credits including an award at the Manchester International Writing Competition, the Wal Cherry Award, and The London International Playwriting Award.