The Little Guide to Cher

If I Could Turn Back Time 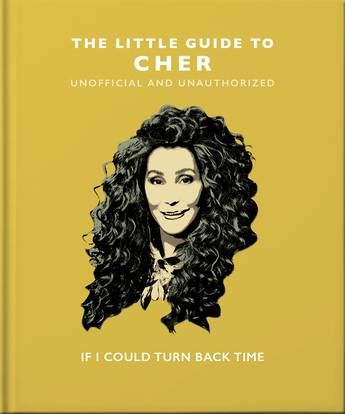 There is simply no one like Cher. A mix of street smart, intelligence, talent and beauty, she's the celebrities' favourite celebrity and if you're not a Dolly Parton person, there's no doubt you're Cher obsessed. With six decades of No.1 hits, from Sonny and Cher days to her latest album (number 26) the Gold Dancing Queen in 2018, she's reinvented herself again and again.

Turning her hand to serious acting in Silkwood, Mask, Moonstruck, The Witches of Eastwick and more, the multi-talented star had new award-winning film career in the 1980s, but yet again emerged as the 'Goddess of Pop' with dance-oriented pop-rock - and gaining a dedicated tribe of gay followers as a result. From LGBTQ rights to politics, from saving elephants to kitchen discos on TikTok, she's as engaged, relevant and controversial as she ever was - and she has a LOT to say for herself. Here is a collection of the funniest, sharpest, most deadpan quotes you'd expect from this authentic one-of-a-kind star who Time magazine named as 'Twitter's most outspoken (and beloved) commentator'.

'The trouble with some women is that they get all excited about nothing - and then marry him.' - BCC Observer, February 2005
More books by this author More books in this series
Category: Humour & Gift
ISBN: 9781800691865
Table Of Contents: I Got You, Babe: Cher's background and the early days of Sonny and Cher.
The One and Only Cher: Becoming Cher. Famously self-effacing, here are her thoughts on her self-image, stage fright and superstardom.
Love and Understanding: Romance, love, divorce, family and friends - tracks her headline-grabbing relationships from her split from Sonny to David Geffen, Greg Allman, Val Kilmer, Tom Cruise and 'bagel boy' Robert Camilletti.
It's Entertainment: This is all about Cher's amazingly successful music and film career.
Believe: Beliefs, values, LGBTQ rights, politics and passions - all the important stuff in life.
If I Could Turn Back Time: Her reflections on body image, beauty, fashion, ageing and health.
Publisher: Welbeck
Imprint: Orange Hippo
Page Extent: 192
Format: Hard Cover
Subject: Gift books