A litany of contemporary fears 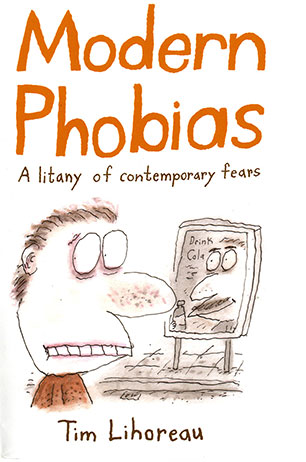 From Agmenophobia, fear of getting into the wrong queue ... to Visulibophobia, fear of seeing the film of a book, Modern Phobias introduces you to the weird and wonderful world of contemporary phobias.

Did you leave work yesterday and have a stab of fear that you'd forgotten to press save before switching off your computer? Did you then go to the pub, get very drunk, then wake the next morning unable to remember what awful things you might have said or done?

You're not paranoid (most of the time) but suffering from modern phobias. Such as Antefamaphobia - the fear that people were talking about you, but stopped just before you entered the room. Or Agmenophobia- the fear that the queue you join will end up being slower than the other one.
More books by this author

Tim Lihoreau was born in Leeds in 1965. His early life was blighted by fronsophobia and it is highly likely that he suffered the odd hebdomophobic attack, something which doctors now think might have been a side-effect of his increasing holusophobia. Despite his crippling hrydaphobia, (not to mention his excirculophobic tendencies) he made it through school bearing his aliacallophobia almost proudly, as if it were a trophy. The lack of any real other options led him to study music at Leeds University - where the first signs of his caerulophobia became apparent. His graduation was made all the more remarkable as it involved overcoming both chronic arcaphobia and occasional bouts of manepostophobia.. He is the author of several books - he notably overcame cadophobia to write The Incomplete and Utter History of Classical Music with Stephen Fry - and is a contributor to both The Daily Telegraph and The Independent, something which helps his disabling contumaphobia.