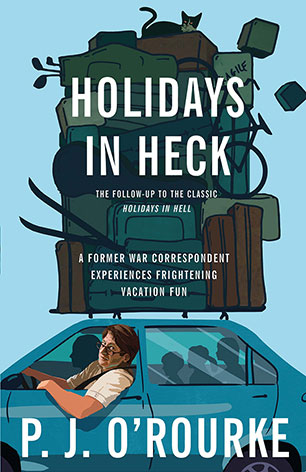 The long-awaited follow up to the classic Holidays in Hell, P.J. O'Rourke's Holidays in Heck is the middle-aged version of his classic travel pieces.

Holidays in Heck takes the reader on a globe-trotting journey to far-reaching places including China, Kyrgyzstan, Afghanistan and the Galapagos Islands. The collection begins after the Iraq War, when P.J. retired from being a war correspondent because he was too old to keep being scared stiff and too stiff to keep sleeping on the ground. Instead he embarked on supposedly more comfortable and allegedly less dangerous travels - often with family in tow - which mostly left him wishing he were under artillery fire again.The result is a hilarious and oftentimes moving portrait of life in the fast lane - only this time as a husband and father of three.

- The first stag hunt in Britain after hunting had been banned. If the British had been half as caring about Indians and American colonists as they are about animals, they'd still rule the world.

- A month-long tour of mainland China's economic hubs where P.J. learned that the entire Chinese concept of political freedom and individual liberty can be summed up in the words, 'New Buick'.

- A harrowing horseback ride across the mountains of Kyrgyzstan - no towns, no roads, no people. If something happened to my horse it would be shot. For me, the medical treatment wouldn't be that sophisticated.
More books by this author

P.J. O'Rourke is the author of 13 books, including Parliament of Whores and Give War a Chance, both of which were #1 New York Times bestsellers. His most recent book is Don't Vote!