The rise and rise of a genuine superstar of Australian sport 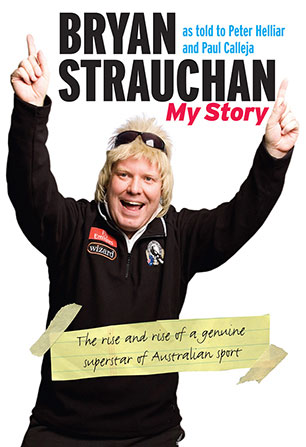 The warts and all story of Bryan 'Strauchanie' Strauchan (rhymes with Warne) - an inspirational tale of a rise to fame from humble beginnings, of a sportsman's courage and determination to follow his dreams, and an expose of what really goes on behind the scenes of an AFL club.

Everyone who wants to be a better person should buy this book.'

In the few short years since he burst onto the football scene, Bryan Keith Strauchan has become a footy legend. Born in Horsham and drafted by Collingwood in 2004, Strauchanie is yet to play a senior game with the Pies but made a spectacular debut playing for Victoria in June 2007.

Read Strauchanie's amazing journey from country boy to official star - it's a rollercoaster ride of emotion. You'll laugh, you'll cry, and you'll be shocked by the revelations. Bigger than the Bible and The Da Vinci Code, Strachanie speaks openly, frankly and from the heart about racism, sport and love.

Strauchanie's thoughts on players, clubs and the future of football

Tributes from other superstars (why blow your own trumpet when other people will blow it for you?
More books by this author

Peter Helliar is Rove McManus's sidekick, with a national profile as a stand-up comedian. He is a regular on Nova FM breakfast show in Melbourne. He will tour nationally (as himself) in 2007, starting with Melbourne Comedy Festival in April. Peter Helliar is reported to be jealous of Strauchanie's success and secretly hopes his alter ego will be delisted or, better still, put on the long-term injury list at the end of 2007. He lives in Melbourne.