The Fatherland and the Jews 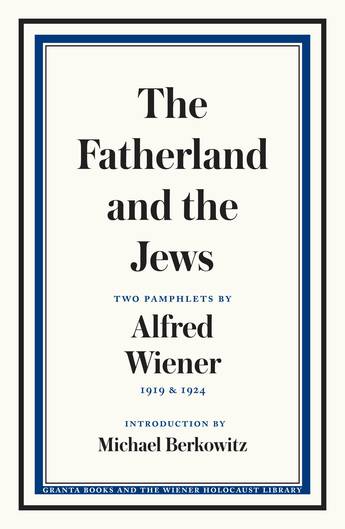 Two seminal works of interwar German Jewish thought that tackle a still-urgent issue - the rise and spread of antisemitism, and the necessity of an intellectual resistance

The inaugural title in a collaboration between the Wiener Library and Granta Books.

These two pamphlets, 'Prelude to Pogroms? Facts for the Thoughtful' and 'German Judaism in Political, Economic and Cultural Terms' mark the first time that Alfred Wiener, the founder of the Wiener Holocaust Library, has been published in English. Together they offer a vital insight into the antisemitic onslaught Germany's Jews were subjected to as the Nazi Party rose to power, and introduce a sharp and sympathetic thinker and speaker to a contemporary audience. Tackling issues such as the planned rise of antisemitism and the scapegoating of minorities, these pamphlets speak as urgently to the contemporary moment as they provide a window on to the past.
More books by this author

Alfred Wiener (1885-1964) was a German Jew who dedicated much of his life to documenting antisemitism and racism in Germany and Europe, and uncovering crimes of Germany's Nazi government. He trained as an Arabist and spent 1909-1911 in the Middle East. He is best known as founder and long-time director of the Wiener Library.

The Wiener Holocaust Library is Britain's largest collection of printed and archival material covering the Holocaust and genocide.

Ben Barkow is a writer and translator and was the director of the Wiener Holocaust Library from 2000 to 2019.