The Life of a Roman Town 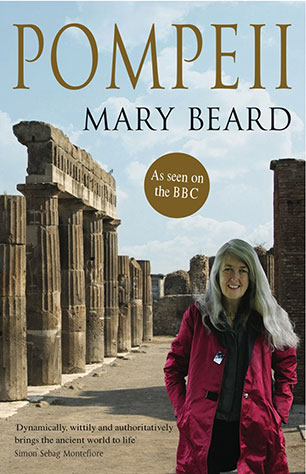 Mary Beard uses the relics buried by the eruption of Mt Vesuvius on AD79 to bring everyday Roman culture alive.

Pompeii explodes a number of myths - from the very date of the eruption, probably a few months later than usually thought; the hygiene of the baths which must have been hotbeds of germs; and the legendary number of brothels, most likely only one, to the massive death count which was probably less than ten per cent of the population.

Street Life, Earning a Living: Baker, Banker and Garum Maker (who ran the city), The Pleasure of the Body: Food, Wine, Sex and Baths, these chapter headings give a surprising insight into the workings of a Roman town. At the Suburban Baths we go from communal bathing to hygiene to erotica. A fast-food joint on the Via dell' Abbondanza introduces food and drink and diets and street life. These are just a few of the strands that make up an extraordinary and involving portrait of an ancient town, its life and its continuing re-discovery, by Britain's leading classicist.
More books by this author

Mary Beard is a Professor of Classics at Newnham College, Cambridge. Her books include The Parthenon and The Colosseum (with Keith Hopkins), and the recent The Roman Triumph. She lives in Cambridge.