A history of Australians and the sea 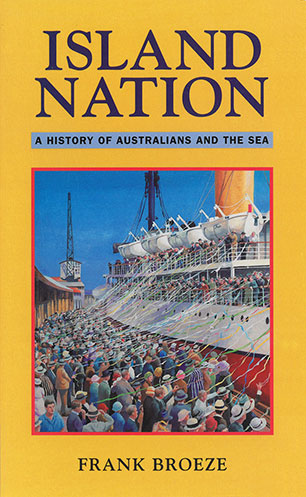 An alternative history of Australia written in a lively and accessible style and exploring the crucial role of the sea in shaping our national identity.

The story of the Australian people is a story of the interaction of land, cities and the sea. Land and cities have received ample attention but the role of the sea as an integral part of our national experience has remained largely unexplored. Island Nation sets out to restore the sea to its rightful place in Australia's history. It offers an alternative account of the past and opens new windows on the forces that have shaped our present.

Island Nation traces the profound, diverse and all-embracing influence of the sea on Australian society - an influence that extends far beyond the coastline. In this story of the interaction of people and the sea, three major issues emerge: controlling sea space, taming distance, and living with the sea. In exploring these issues in all their diversity, Island Nation ranges widely, encompassing the birth of an Australian 'Monroe Doctrine', the development of unique economic and political institutions, the role of surfing and the growth of tourism, the impact of the sea on Australian art, 'ships of shame' and very much else besides.

'In this deftly innovative survey, Frank Broeze draws the reader's attention away from the landmass to the oceans that surround it, and then back to the shoreline, ports and beaches. There have been previous studies of Australians and the sea, but this is our first fully amphibious account.' - Professor Stuart Macintyre
More books by this author

2 Independent Australia: Security and the Dilemmas of Self-reliance

5 The Heart of Maritime Life: Australia's Ports and Port Cities

PART III: LIVING WITH THE SEA - WORK, CULTURE AND LIFESTYLE

7 Maritime Workers and their Unions

8 A Culture of the Sea

9 The Sea in Australia's Life