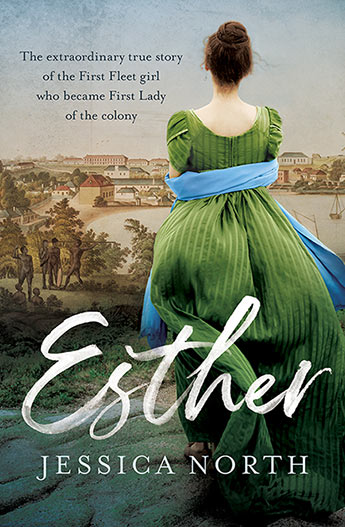 The little-known rags to riches love story of a convict girl who arrived in Australia on the First Fleet. Much like another, better-known colonial woman, Elizabeth Macarthur, Esther successfully managed her husband's property and became a significant figure in the new colony.

Shortlisted for the Society of Women Writers NSW Book Awards

Esther only just escaped the hangman in London. Aged 16, she stood trial at the Old Bailey for stealing 24 yards of black silk lace. Her sentence was transportation to the other side of the world.

She embarked on the perilous journey on the First Fleet as a convict, with no idea of what lay ahead. Once on shore, she became the servant and, in time, the lover of the dashing young first lieutenant George Johnston. But life in the fledgling colony could be gruelling, with starvation looming and lashings for convicts who stepped out of line.

Esther was one of the first Jewish women to arrive in the new land. Through her we meet some of the key people who helped shape the nation. Her life is an extraordinary rags-to-riches story. As leader of the Rum Rebellion against Governor Bligh, George Johnston became Lieutenant-Governor of NSW, making Esther First Lady of the colony, a remarkable rise in society for a former convict.

'North skilfully weaves together one woman's fascinating saga with an equally fascinating history of the early colonial period of Australia. The resulting true story is sometimes as strange and thrilling as a fairytale.' - Lee Kofman, author of The Dangerous Bride
More books by this author

Jessica North has been researching Esther's story for over a decade, discovering intriguing new information. She is a program director at the Australian Research Institute for Environment and Sustainability at Macquarie University, and author of several guides.