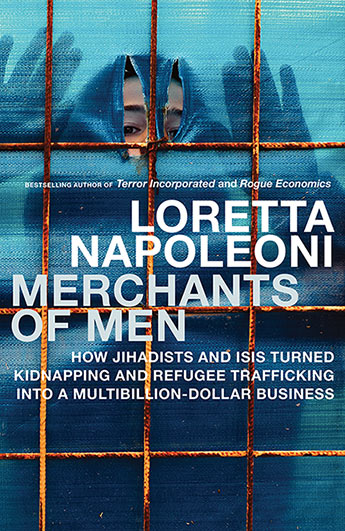 The compelling and highly-informed account of one of the world's darkest and most lucrative new businesses - human trafficking.

Every day, a powerful and sophisticated underground business delivers thousands of refugees along the Mediterranean coasts of Europe. A new breed of criminals, risen from the political chaos of post-9/11 Western foreign policy and the fiasco of the Arab Spring, controls it. These merchants of men are intertwined with jihadist organisations such as al Qaeda. Previously, they have prospered from smuggling cocaine from West Africa and kidnapping Westerners. More recently, the destabilisation of Syria and Iraq, coupled with the rise of ISIS, offered them new business opportunities in the Middle East, from selling Western hostages to jihadist groups to trafficking in refugees numbering in the millions, generating billions of dollars annually.

Merchants of Men is based on exclusive access to former hostages, counter-terrorism experts, members of security services, and hostage negotiators actively involved in ransom bargaining and rescue missions, among many others. In a gripping narrative, Loretta Napoleoni describes the brutal processes of kidnapping and human trafficking from a personal and global level, and uncovers the ruthless business models that lie behind them.

Loretta Napoleoni is the author of The Islamist Phoenix: ISIS and the Redrawing of the Middle East, Rogue Economics: Capitalism's New Reality, and Terror Incorporated: Tracing the Money Behind Global Terrorism. She lives in London and Montana, USA.