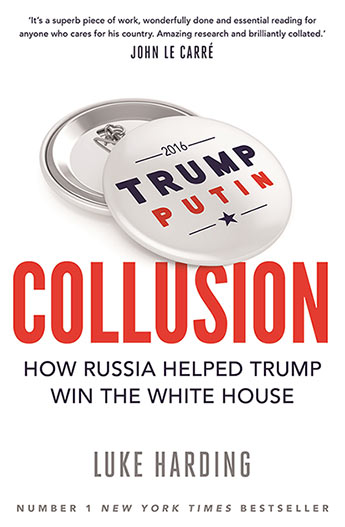 A gripping, alarming expose about the biggest political scandal of the modern era - from the author of The Snowden Files.

MOSCOW, July 1987. Real-estate tycoon Donald Trump visits Russia for the first time at the invitation of the Soviet government.

WASHINGTON, January 2017. Steele’s explosive dossier alleges that the Kremlin has been ‘cultivating, supporting, and assisting’ Trump for years and that they have compromising information about him. Trump responds on Twitter, ‘FAKE NEWS’.

In Collusion, award-winning journalist Luke Harding reveals the true nature of Trump’s decades-long relationship with Russia and presents the gripping inside story of the dossier. It features exclusive new material and draws on sources from the intelligence community.

This book gets to the heart of the biggest political scandal of the modern era. Russia is reshaping the world order to its advantage; this is something that should trouble us all.
More books by this author More books in this series

Luke Harding is an award-winning foreign correspondent with the Guardian. Between 2007 and 2011 he was the Guardian's Moscow bureau chief; the Kremlin expelled him from the country in the first case of its kind since the cold war. He is the author of A Very Expensive Poison: The Definitive Story of the Murder of Litvinenko and Russia's War with the West, The Snowden Files: The Inside Story of the World's Most Wanted Man, Mafia State and co-author of WikiLeaks: Inside Julian Assange's War on Secrecy, The Liar: The Fall of Jonathan Aitken (nominated for the Orwell Prize). Two of Harding's books have been made into films; The Fifth Estate and Snowden.