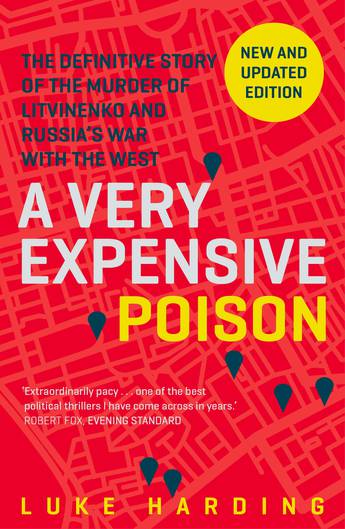 The shocking true story of the Litvinenko poisoning, told by the author of The Snowden Files and Wikileaks.

1 November 2006. Alexander Litvinenko is brazenly poisoned in central London. Twenty two days later he dies, killed from the inside. The poison? Polonium; a rare, lethal and highly radioactive substance. His crime? He had made some powerful enemies in Russia.

Based on the best part of a decade's reporting, as well as extensive interviews with those closest to the events (including the murder suspects), and access to trial evidence, Luke Harding's A Very Expensive Poison is the definitive inside story of the life and death of Alexander Litvinenko. Harding traces the journey of the nuclear poison across London, from hotel room to nightclub, assassin to victim; it is a deadly trail that seemingly leads back to the Russian state itself. This is a shocking real-life revenge tragedy with corruption and subterfuge at every turn, and walk- on parts from Russian mafia, the KGB, MI6 agents, dedicated British coppers, Russian dissidents. At the heart of this all is an individual and his family torn apart by a ruthless crime.
More books by this author

Luke Harding is an award-winning foreign correspondent with the Guardian. Between 2007 and 2011 he was the Guardian's Moscow bureau chief; the Kremlin expelled him from the country in the first case of its kind since the cold war. He is the author of Mafia State and co-author of WikiLeaks: Inside Julian Assange's War on Secrecy, The Liar: The Fall of Jonathan Aitken (nominated for the Orwell Prize) and The Snowden Files. Two of Harding's books have been made into films; The Fifth Estate and Snowden.