Life Lessons in Speaking Out, Standing Tall & Leading the Way 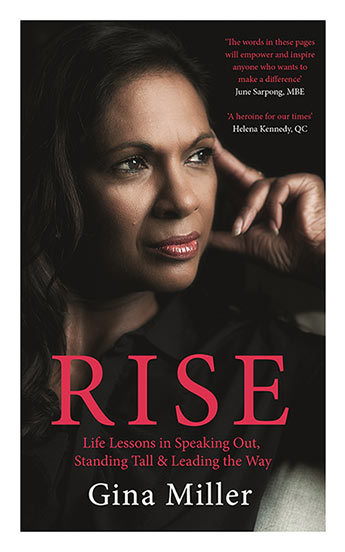 An extraordinary account of what it means to stand up for justice, and for yourself, no matter the cost

Gina Miller came to prominence when she brought one of the most significant constitutional cases ever to be heard in the British Supreme Court. Gina successfully challenged the UK government's authority to trigger Article 50 - the formal notification to leave the European Union - without parliamentary approval. For standing up for what she believed was right, Miller became the target of not just racist and sexist verbal abuse, but physical threats to herself and her family.

She was repeatedly asked: how could she keep going at the cost of so much pain and aggravation? To her the answer was obvious: she'd been doing it all her life.

In Rise, Gina Miller draws on a lifetime of fighting injustice and looks at the moments that made her; the trauma, failures and successes that gave her the confidence in her voice, the ability to know how to use it and the strength not to let others diminish it, even when it came at incredible cost. To those who say one person cannot make a difference, this memoir demonstrates irrefutably how you can.
More books by this author

Gina Miller was the lead claimant in the 2016 constitutional legal case against the UK Government over triggering Article 50. Born and raised in Guyana, she went to boarding school in England at the age of eleven and went on to study Law at the University of East London, then Marketing at the University of North London. In 2009, she and her husband Alan Miller co-founded SCM Direct, a disruptive investment management company, and the True and Fair Foundation, the latter of which provides funding and support to smaller charities. She has three children: Lucy-Ann, Luca and Lana.

Gina counts herself as a conscious capitalist and believes we all have a duty to give back to the society that affords us success, including actively stepping up and defending what is right.