Twenty Chickens for a Saddle

The Story of an African Childhood 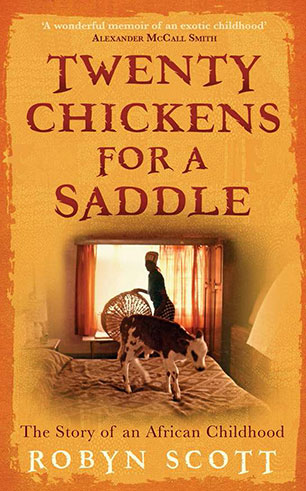 An uplifting, engaging and deeply affectionate portrayal of a wonderfully eccentric family and their life in Botswana.

When Robyn Scott was six her parents left the tranquil hills of New Zealand, taking their three small children to live in the wild Botswana bush, where they grew up collecting snakes, canoeing with crocodiles and breaking in horses in the veld. Returning to the country where Robyn's eccentric grandfather had served as a pilot to Seretse Khama, Botswana's first, beloved president, her parents continued in his pioneering and unconventional footsteps.

This is the extraordinary story of the family's fifteen years in Botswana, during which Robyn's mother single-handedly homeschooled the three children, and her father ran a flying doctor practice, attempting, with often unexpected results, to adapt his experience to the unique demands of a rural practice and the growing problem of AIDS.

A delightful account of an education where dissecting a snake is the closest Robyn and her brother and sister come to a biology lesson, and children from the cattle posts are their only classmates, Twenty Chickens for a Saddle is also a unique insight into modern Botswana. Set against the backdrop of one of Africa's rare democratic success stories battling with one of the continent's worst AIDS crises, this book remains an uplifting, engaging and deeply affectionate portrayal of an extraordinary place and family.
More books by this author

Robyn Scott was born in 1981. She began her formal education at fifteen when she went to school in Zimbabwe, before moving to Auckland for her undergraduate degree. In 2004 she was awarded a scholarship to Cambridge University, from where she graduated with distinction. In 2005, she spent three months at the Financial Times, writing leader articles. Following this she divided her time between helping her father write a book on nutritional medicine and consulting for the pharmaceutical industry and a political risk advisory group specialising in Africa. In her spare time, she is establishing an AIDS orphan charity with her mother. She lives in London.