The Thing About Prague ... 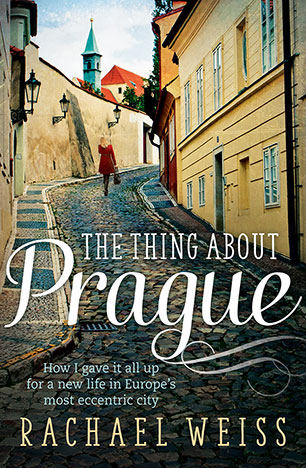 The bestselling author of Me, Myself & Prague looks for a new life in one of Europe's most beautiful and idiosyncratic cities. A smart and very funny memoir about the highs and lows of trying to establish a life in a place that values beer and potatoes above everything else!

'I'd like to say that my decision to move to Prague permanently was based on something grand and noble - a desire to trace my roots, a sense of adventure, my literary heart yearning to burst into flower in the sweet soil of Old Europe - but I can't. The truth is that I had nothing better to do.'

When Rachael Weiss left a good job, Thelma the cat and a normal life in Sydney for the romantic dream of being a writer in Prague she intended to stay forever. She lasted just three years, exasperated by the eccentricities of her ancestral city and the mind-boggling bureaucracy and customs of a country that values beer and potatoes above everything else.

In this surprising and generous memoir full of warmth and unstoppable sociability, Rachael attempts to write her great novel, buy an apartment (any apartment!), dodge unscrupulous employers, and perhaps find love. She gets lost in the woods with a Kyrgyzstani software engineer who wants to eat humans, finds herself leading services at the Spanish synagogue with no real idea of what she was doing and spends long nights drinking beer with a colourful cast of crazy, warm and slightly mad locals and expats.

Rich in absurdities and gentle humour, The Thing About Pragueis rife with insight, culture clashes, friendships and above all charm.

Rachael Weiss was born in Sydney and lived there for nearly forty years, working as a mid-level administrator before casting her mundane life aside to pursue the romantic dream of a writer's life in one of Europe's most beautiful cities, Prague. She lived in Prague for four years during which time she drank a lot, hiked, played Scrabble, wrote horoscopes for a living, drank some more, dated some of Europe's most ineligible bachelors and finally wrote a book about her misadventures, before moving again to pursue the altogether more pragmatic dream of a university administrator's life in one of Europe's lesser-known cities, Sheffield. She has written three books: Are We There Yet?, the bestselling Me, Mself and Prague, and its acclaimed follow-up, The Thing About Prague. She currently lives in Dublin where she is working on her fourth book.