The Never, Um, Ever Ending Story

Life, Countdown and everything in between 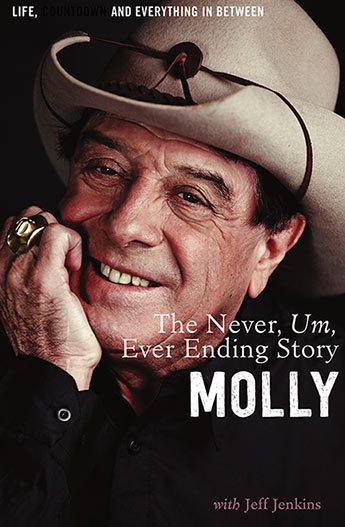 Molly Meldrum's warm, vivid, often hilarious and always compelling account of life in and out of Countdown.

'Molly gives us the full scoop on the Countdown years ... The book is rich with behind-the-scenes lore and gore ... It would be unpatriotic not to love the guy. He takes some of the better elements of the national character - lack of pretension, a love of simple pleasures - and cranks them up to 11.' Weekend Australian

More than thirty-five years in the making, this is the story of Ian 'Molly' Meldrum and the television show that stopped the nation.

In 1974 Molly was working as a record producer and music journalist when he was offered the chance to be the talent co-ordinator of a new music show called Countdown. It would run for the next thirteen years and become one of the most-loved and most-watched programs on Australian television. It also turned Molly into a national institution (or 'mental institution' as one of his friends put it).

During that period he not only became the most influential voice in Australian music, he endeared himself to millions of viewers with a uniquely unpolished interviewing style and a tangible on-screen passion. For better or for worse, whether interviewing Prince Charles or Sid Vicious, Molly was always Molly. Along the way he talked, partied, argued, exchanged blows and became firm friends with a roll-call of the world's greatest musical names. Sir Elton John famously described him as 'the best thing that ever happened to Australian music.'

Filled with outrageous anecdotes and a kaleidoscopic cast of musos, colourful characters and international superstars, The Never, Um, Ever Ending Story is Molly's hilarious, vivid, warm and always compelling memoir of his chaotic, incredible life and the show that made him famous.
More books by this author

Ian 'Molly' Meldrum was born in 1943. Described as 'the single most important person in the Australian pop industry for 40 years', he is best known as the host, talent co-ordinator, on-air interviewer and music news presenter on Countdown from 1974-1987. He has also worked as music critic, journalist, musical entrepreneur and record producer. He hosted the Australian leg of Live Aid in July 1985 and was subsequently made a Member of the Order of Australia. Molly lives in Richmond, Victoria. He is passionate supporter of both the St Kilda Football Club and The Melbourne Storm NRL team.